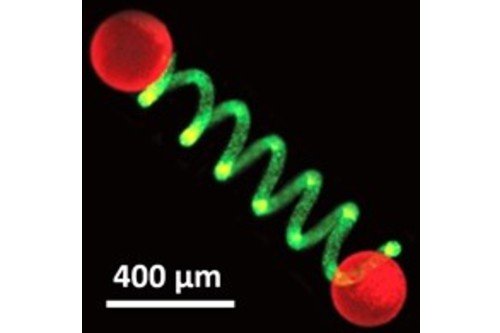 A University of Bristol-led team of international scientists with an interest in protoliving technologies, has today published research which paves the way to building new semi-autonomous devices with potential applications in miniaturized soft robotics, microscale sensing and bioengineering.

Micro-actuators are devices that can convert signals and energy into mechanically driven movement in small-scale structures and are important in a wide range of advanced microscale technologies.

Normally, micro-actuators rely on external changes in bulk properties such as pH and temperature to trigger repeatable mechanical transformations. Now, in a new study published today in Nature Chemistry, Professor Stephen Mann from the University of Bristol’s School of Chemistry, and the Max Planck Bristol Centre for Minimal Biology together with colleagues Drs Ning Gao, Mei Li, Liangfei Tian, Avinash Patil and Pavan Kumar in the Bristol Centre for Protolife Research demonstrate a new approach that uses internal changes as the trigger for signal-based movement.

In a series of experiments, the researchers successfully embedded tens of thousands of artificial cell-like entities (protocells) within helical filaments of a polysaccharide hydrogel to produce tiny free-standing springs that are chemically powered from within.

The Team first loaded the protocells with urease – an enzyme that generates carbonate ions when supplied with urea – and then captured the artificial cells in a twisting jet of calcium alginate hydrogel using a home-built microfluidic device.

They discovered that the helical filaments start to uncoil in water when the urease is switched on, and that the speed of the lengthwise extension increased as more carbonate ions escaped from the protocells into the surrounding hydrogel.

The coupling of endogenous chemical activity to mechanical movement was associated with the breaking of crosslinks in the hydrogel due to removal of the calcium ions by on-site formation of calcium carbonate particles, which led to the slow release of elastic energy in the spring-like microstructures.

Conversely, reclaiming the calcium ions by dissolving calcium carbonate particles using a second population of acid-producing glucose oxidase-containing protocells placed outside the filaments reversed the uncoiling and re-established the original helical pitch of the free-standing springs.

Based on these observations, the researchers used the helical protocell filaments as a drive shaft for performing protocell-powered mechanical work. For this, they attached a single “giant” protocell at each end of the coiled hydrogel and exploited the tiny dumbbells as free-standing micro-actuators (see image). Urease activity in the two giant protocells was sufficient to cause a lateral extension of the dumbbell. The movement could be curtailed if one of the attached giant protocells contained glucose oxidase, which worked to restore the lost calcium in the hydrogel connector. In this way, a range of different modes of chemical-mechanical transduction could be programmed into the micro-actuators by on-board processing of chemical signals.

Professor Stephen Mann, co-Director of the Max Planck Bristol Centre for Minimal Biology (MPBC) at Bristol, said: “We have a longstanding interest in protoliving technologies. One key challenge is how to interface protocell communities with their environment to produce functional relationships. The new work provides a step in this direction as it illustrates how endogenous chemical processes can be coupled to their energized surroundings to produce a programmable chemo-mechanical micro-system”.

Dr Ning Gao, also at the MPBC and School of Chemistry at the University of Bristol added: “We hope that our approach will motivate the fabrication of new types of soft adaptive microstructures that operate via increased levels of autonomy.”