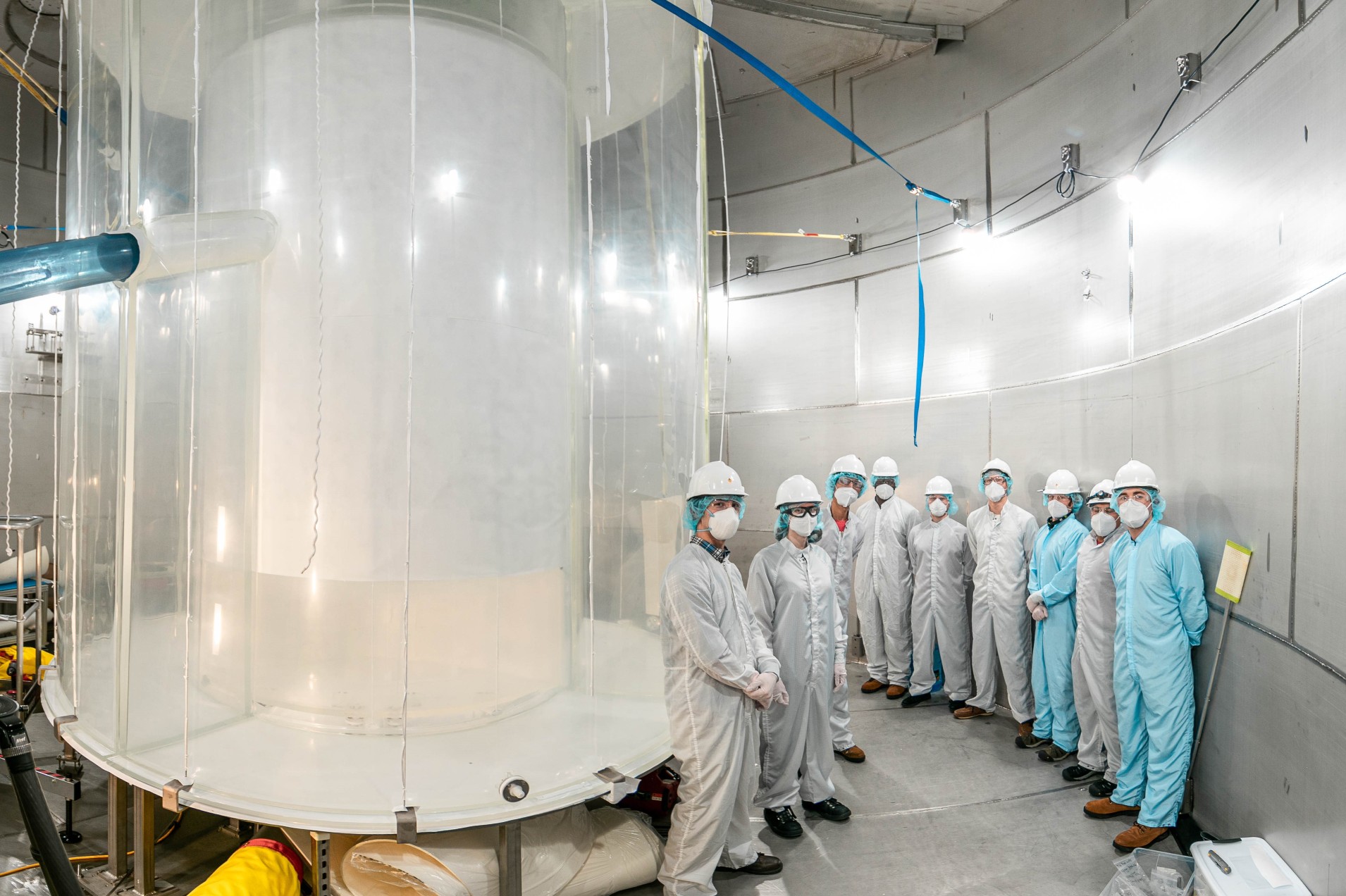 The world’s largest and most sensitive dark matter experiment has come to life and is delivering results, moving a step closer to offering clues about one of the biggest mysteries of the Universe.

The LUX-ZEPLIN Dark Matter Experiment (LZ), based at the Sanford Underground Research Facility in South Dakota, US, has gathered its first result – showing the experiment is successfully operating as designed.

Researchers from the University of Bristol’s School of Physics, are among a number of international partners supporting the experiment.

The experiment now needs to run for up to 1,000 days to realise its full sensitivity. This initial result is just a fraction of that exposure, which validates the decade-long design and construction effort.

LZ is intricately and innovatively designed to find direct evidence of dark matter – a mysterious invisible substance thought to make up most of the mass of the Universe.

Dark matter is particularly challenging to detect, as it does not emit or absorb light or any other form of radiation.

The LZ detector will try to capture the very rare and very faint interactions between dark matter and its 7-tonne liquid xenon target. To do this, LZ must be carefully and delicately calibrated and any background noise removed so the experiment can be perfectly tuned to observe these interactions.

Today, the international project led by the Department of Energy’s (DOE) Lawrence Berkeley National Laboratory (Berkeley Lab) has announced the detector is running as hoped after years of careful set-up.

Professor Henrique Araújo, from Imperial College London, is the UK lead and co-lead for the development of the LZ Xenon Detector. He said: “An experiment of the scale and sensitivity of LZ can be unforgiving: the smallest design flaw may compromise the whole enterprise. And since the LZ cryostat cannot be opened underground, we needed to make sure we got it right the first time, much like if we were to launch LZ into space… Well, it looks like we did get it right.”

In a paper posted online today on the experiment’s website, LZ researchers report that with the initial run, LZ is already the world’s most sensitive dark matter detector.

After the successful start, full-scale observations can begin with the hope of finding the first direct evidence of dark matter.

LZ involves an international team of 250 scientists and engineers from 35 institutions from the US, UK, Portugal, and South Korea. The UK team, funded by the Science and Technology Facilities Council (STFC), consists of more than 50 people from the universities of Bristol, Edinburgh, Imperial, Liverpool, Oxford, Royal Holloway, Sheffield and UCL and STFC’s Rutherford Appleton Laboratory.

Many of these UK groups came from the ZEPLIN programme, which developed the liquid xenon technology for dark matter searches at STFC’s Boulby Underground Laboratory. The UK ZEPLIN groups then joined the LUX experiment in the USA in 2012 and started designing LZ around that time.

Professor Araújo said: “It’s been a privilege to work in such a fantastic project, full of talented and fun people. The pioneering ZEPLIN programme lives on as the ‘Z’ in ‘LZ’ – but we needed a much larger international team to achieve something on this scale.”

A significant fraction of the very large number of radioassays needed to identify the best materials was conducted in the UK (at STFC’s Boulby Underground Laboratory, and UCL).

LZ Spokesperson Professor Hugh Lippincott, from the University of California Santa Barbara, echoes the comment from Araújo said: "Working across such large distances is always challenging, especially during Covid when we were unable to gather in person. We probably had a few too many Zoom calls, but it was great to see how well people were able to work together, with work passing back-and-forth across the ocean at the beginning and end of each day."

Researchers from the University of Bristol LZ group have made significant contributions to the software infrastructure of the experiment and contributed to the construction and commissioning of the LZ Outer Detector, with Bristol PhD student Sam Eriksen working underground at SURF in 2020 at the height of the pandemic.

The group also worked on the optimisation of the Outer Detector veto that helps suppress background processes that otherwise could look like a dark matter interaction in the detector.

Professor Henning Flaecher, PI of the Bristol group, added: “This is a great first result for LZ and it is a delight to see years of work coming to fruition. We look forward to analysing the data LZ will collect over the coming years and anticipate further exciting results.”

LZ is the largest and most sensitive experiment searching for dark matter particles, in particular Weakly Interacting Massive Particles (WIMPs).

These theorised elementary particles interact with gravity – which is how we know about the existence of dark matter in the first place – and possibly through a new weak interaction too.

This means WIMPs are expected to collide with ordinary matter – albeit very rarely and very faintly. This is why very quiet and very sensitive particle detectors are needed for WIMP detection.

At the centre of the experiment is a large liquid xenon particle detector maintained at -100oC, surrounded by photo-sensors. If a WIMP interacts with a xenon atom, and produces even a tiny amount of light, the sensors will capture it.

But in order to see these rare interactions, the team had to carefully remove all natural background radiation from the detector materials first.

But this is not enough – which is why LZ is operating around a mile underground. This shields it from cosmic rays, which bombard experiments at the surface of the earth. The detector and its cryostat sit inside a huge water tank to protect the experiment from particles and radiation coming from the laboratory walls.

Finally, the team made sure that the liquid xenon itself is as pure as possible by carefully removing a key contaminant through a complex years-long process.

Many complex systems had to come together for LZ to work, and these first results show they are performing in harmony seamlessly.

STFC’s Dark Matter Group Leader Pawel Majewski said: “It is gratifying to see the LZ experiment delivering its first scientific results. For the Rutherford Appleton Laboratory, one of the LZ founding members, it has been a privilege to be part of this wonderful endeavour bringing together scientists and engineers from all over the world. We look forward to seeing more exciting results with an anticipation of a significant discovery awaiting us in the years to come.”

LZ is supported by the U.S. Department of Energy, Office of Science, Office of High Energy Physics and the National Energy Research Scientific Computing Center, a DOE Office of Science user facility. LZ is also supported by U.S. National Science Foundation; the Science & Technology Facilities Council of the United Kingdom; the Portuguese Foundation for Science and Technology; the Institute for Basic Science, Korea; and the LZ collaborating institutions.  The LZ collaboration acknowledges the assistance of the Sanford Underground Research Facility.