Professor Hugh Brady to step down as Vice-Chancellor and President 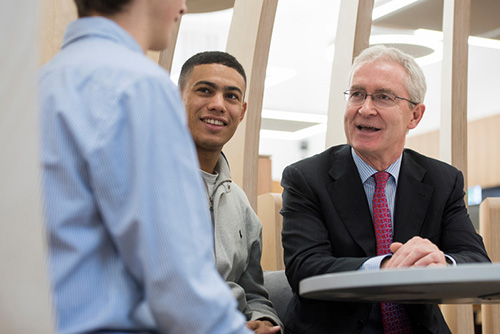 After six years as Vice-Chancellor & President of the University of Bristol, Professor Hugh Brady has announced that he will be stepping down next summer to become the new President of Imperial College London.

Under his leadership, the University has implemented an ambitious strategic plan, with a focus on pursuing new research, becoming a sector-leader in sustainability and civic initiatives, and investing significantly in the student experience.

Professor Brady said: "It has been an unparalleled privilege to lead this great university, to work alongside brilliant and committed colleagues and students, and to collaborate with our world-class partners here in Bristol, across the UK and globally.

"Looking to the future, we have clear ambitions to build on our success as a research-rich institution that is globally competitive but also focused on its civic responsibilities.

"Our university is ready to take on the opportunities and challenges of a post-pandemic future, and it has been an honour to have played a part in its success."

The University of Bristol’s key achievements under the leadership of Professor Brady have included:

Sir Paul Nurse, the University's Chancellor, paid tribute to Professor Brady's achievements and said: "Professor Brady has delivered outstanding leadership to our university, guided by a bold strategic plan which has seen the University pursue new teaching and research initiatives, invest in new facilities and infrastructure projects, while strengthening its position as a research-intensive university."

Jack Boyer, Chair of the University's Board of Trustees, said that Professor Brady had ensured the University 'is well placed to address the demands and opportunities of the future'.

He added: "As a strong advocate of partnership and collaboration, Professor Brady has driven the University’s economic, social and cultural contribution to the Bristol region – a focus that will continue with the current leadership team.

"The University of Bristol's international activity, reach and global prominence have also grown rapidly, with partnerships and collaborative agreements across the globe. Professor Brady has made an enormous contribution to securing a very positive future for our university, to supporting the higher education sector more widely, and to the city of Bristol.

"It has been an absolute pleasure to work with Professor Brady. Imperial is gaining an outstanding leader and I wish him the very best for the future."

A graduate of University College Dublin (UCD), Professor Hugh Brady trained in general medicine and nephrology, and was awarded PhD and MD degrees for research in renal physiology and molecular medicine, respectively. His academic career as a physician-scientist included positions at Harvard Medical School, the University of Toronto and UCD. He is an international authority on the pathogenesis of renal inflammation and diabetic kidney disease.

Since coming to Bristol in September 2015, Professor Brady has led an institution-wide strategic planning process which yielded a new Vision and Strategy for the University. A central theme of the plan is the re-imagining of the civic university for the 21st century. Highlights of the new strategic plan include:

Professor Brady served as President of UCD from 2004-13. He has held a number of other leadership roles, including membership of Ireland’s Higher Education Authority, Chairman of the Irish Universities Association and Chairman of the Universitas 21 Network of global research universities. He is a member of the Board of Universities UK and a Director of the Russell Group. He is a non-executive director of Kerry Group plc and ICON plc and serves on the Western Gateway Partnership Board. He was awarded an Honorary Doctorate of Science from the Queen’s University Belfast, an Honorary Fellowship from the Royal College of Anaesthetists in Ireland and the Robert Menzies Medal from the University of Melbourne.