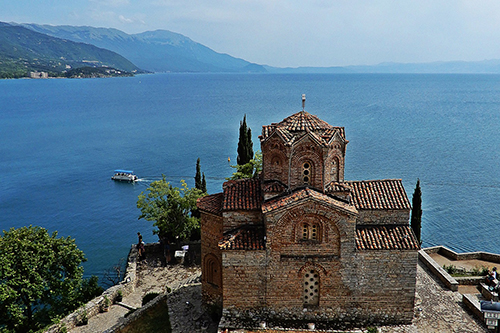 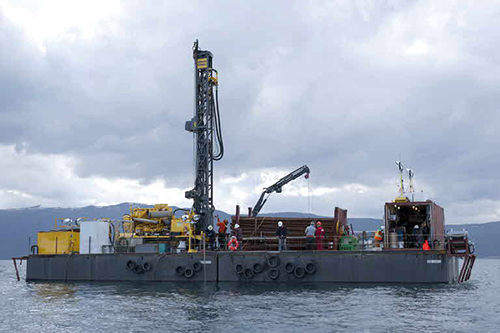 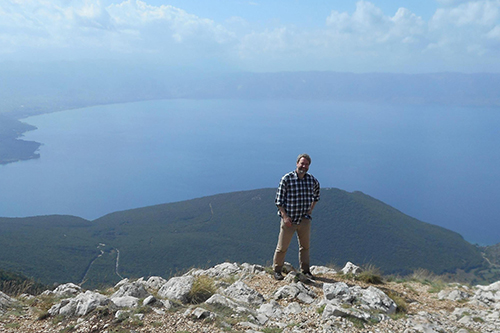 Dr Jens Holtvoeth in the Galicica Mountains of North Macedonia, with Lake Ohrid and the Albanian shoreline in the background

New research by an international team of scientists, led by the University of Cologne and including the University of Bristol, has revealed a lake considered to be the oldest in Europe was first established 1.36 million years ago and has existed continuously ever since.

Lake Ohrid, located at the border between the Republics of Albania and North Macedonia, is famous for its exceptional biodiversity, with more than 300 unique (endemic) animal and plant species.

The science team, led by Dr Bernd Wagner from the University of Cologne and including Dr Jens Holtvoeth from the School of Earth Sciences, has published the results of a deep drilling campaign at Lake Ohrid in the journal Nature.

The project aimed to obtain information on the age and origin of the lake, the climate history of the northern Mediterranean region, and the reasons for the high level of endemism and biodiversity. Fieldwork took place in 2013 and was one of the most successful lake drilling campaigns of the International Continental Scientific Drilling Program (ICDP). The drilling reached a maximum depth of 568 metres into the sediments in the centre of the lake, at a water depth of 245 metres.

It took five years to analyse the sediment cores recovered, using a wide range of independent techniques to provide a robust understanding of past climate variability and associated environmental change. The science team have now revealed that the lake first established 1.36 million years ago and existed continuously ever since.

The extensive sediment sequence has allowed the team to reconstruct climate variability over the entire history of the lake in exquisite detail. Geochemical data and the pollen record show that winter rainfall increased in the northern Mediterranean region during warm, interglacial periods. During these intervals, climate model simulations indicate increased formation of low-pressure areas, or cyclones, over the Mediterranean Sea, particularly during autumn. This was most likely due to warm sea-surface temperatures, which led to considerably higher rainfall in the northern Mediterranean borderlands.

Dr Holtvoeth, Lecturer at Bristol's School of Earth Sciences, explained: "Agriculture in this region relies heavily on winter rainfall and it’s crucial to know how the strongly seasonal rainfall pattern is going develop in the context of the global change in climate that we currently observe. However, recent climate model predictions on Mediterranean winter rainfall still produce ambiguous results.

"The Ohrid research team therefore hope that the insights gained from this outstanding sedimentary record regarding the drivers of Mediterranean winter precipitation will help to constrain future climate scenarios and to improve the model outputs for the region."

'Mediterranean winter rainfall in phase with African monsoons during the past 1.36 million years' by Bernd Wagner, Hendrik Vogel et al in Nature