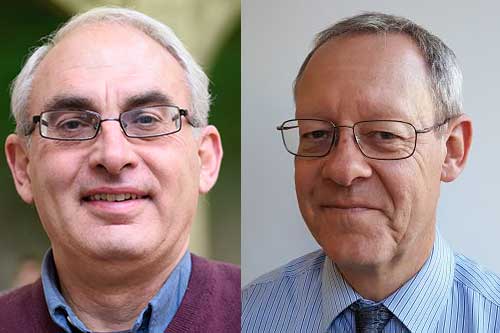 The University is delighted to announce the appointment of Professor Paddy Ireland and Professor Tim Peters as Interim Pro Vice-Chancellor for Research and Enterprise on a job-share basis.

They will take up the interim job-share role on 21 October, in advance of Professor Nishan Canagarajah’s departure, and remain in post until the permanent appointment process is concluded.

Tim Peters is Professor of Primary Care Health Services Research at Bristol Medical School and Research Director for the Faculty of Health Sciences. He was Research Director for the Faculty of Medicine and Dentistry (2006-09), Head of the Department of Community Based Medicine (2008-10) and Head of the School of Clinical Sciences (2010-17). Professor Peters is a statistician and trialist with research interests focusing on community-based evaluations of health interventions, particularly those relating to mental health and chronic disease. He has extensive experience of research strategy, fellowships and grants committees, including for the MRC, NIHR, the Academy of Medical Sciences, Health and Care Research Wales, the Health Research Board in Ireland, Marie Curie, Macmillan Cancer Support and the Wellcome Trust. He was a member of sub-panels in RAE2008 and REF2014 and is a member of sub-panel 2 for REF2021. He holds Honorary Fellowships of the Royal Colleges of General Practitioners and of Speech and Language Therapists, is an NIHR Senior Investigator (Emeritus), a Fellow of the Faculty of Public Health and a Fellow of the Academy of Medical Sciences.