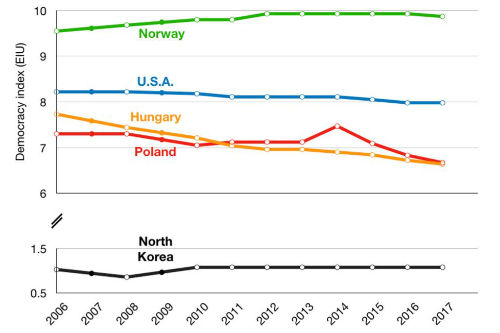 Democracy index for selected countries, as measured by the Economist Intelligence Unit for 2006 - 2017. The EIU democracy index takes values between 0 (worst) and 10 (best). Shown are data for Norway (green), United States of America (blue), Hungary (orange), Poland (red) and North Korea (black), the values for 2007 and 2009 are linear interpolations as no indices were reported for these two years. Dr Karoline Wiesner, University of Bristol

But with global politics becoming more unpredictable – highlighted by the UK's vote for Brexit and the presidential elections of Donald Trump in the USA and Jair Bolsonaro in Brazil – it is being used to examine the stability of democracies.

An international, interdisciplinary team including mathematicians, economists, psychologists, philosophers, sociologists and political scientists publishes a collective examination of the work in this field today in the European Journal of Physics.

Dr Karoline Wiesner, from the University of Bristol’s School of Mathematics, is the lead author.  She explains the premise of the team’s work: “There is little work on the circumstances under which instability of democracy might happen.  So, we lack the theory to show us how a democracy destabilises to the point it is not describable as a democracy anymore.

“This reflects the way we in the west have lived in the past 50 to 60 years.  But times have changed. Citizens of democracies are becoming less content with their institutions. They are increasingly willing to ditch institutions and norms that have been central to democracy.  They are more attracted to alternative, even autocratic regime types.

“Furthermore, we recently saw elected officials in Hungary and Poland put pressure on critical media and undermine institutions like independent courts.  This illustrates the need to rethink the idea of democracies as stable institutions.”

The team's paper focuses on two features of complex social systems in general, and of democratic systems in particular: feedback and stability, and their mutual relationship.

They examined how the stability of the social institutions democracy relies on are affected by feedback loops.

They looked at several strands, including economic inequality, political divergence, and the impact of media and social media on societal ‘norms’.

The authors say: “Economic inequality and the health of democracy are closely linked. We know greater inequality associates with poorer health and social problems. But it is also linked to political polarisation.

“This is because democracy presupposes a basic equality of influence. But when economic inequality increases, so do differences in influence over institutions. Those who have large financial resources can better influence institutional change than those who do not.

“A shock increase in economic inequality – such as resulted from the policy responses to the 2008 financial crisis – leads to corrosion of the relationship between less well-off voters’ choices and institutional outcomes.  It may even lead to effective or actual non-democratic rule.

The team also shows that extreme diversity of opinion can sometimes be a cause of instability.  While a degree of diversity and partisan disagreement is healthy and even necessary in a democracy, too much may lead to an inability to understand and solve joint problems.

Radicalisation and polarisation compound this.  Radicalisation occurs when political elites try to reshape politics to secure a permanent advantage by bending rules, ignoring norms, and pursuing strategies that seemed off limits.

Polarisation involves a breakdown of common faith.  It leads members of one partisan coalition to ignore potential threats to democracy, based on the belief that having their opponents in power would be worse.

Professor Henry Farrell, one of the co-authors from the US, said: “In the US, where the media is less-heavily regulated than in other comparable democracies, we have seen this happen.  Talk radio and Fox News have long catered to a conservative constituency hungry for information and perspectives that confirm its beliefs.

“This creates a feedback loop fed by commercial imperatives between the media and its listeners.  In a similar way, partisan competition and the need to support or thwart policy goals may lead to feedback loops between media and political actors.”

Finally, the authors explored how social institutions can be destabilised by the erosion of social norms.

“Much of democracy relies on norms, conventions and expectations of people’s behaviour,” said Professor Stephan Lewandowsky, the psychologist on the team, from Bristol’s School of Psychological Science.  “This means numerous psychological processes can contribute to the stability or instability of democracy.

“Social media can have a profound impact on these processes.  There is a lot of evidence that the strength with which people hold an opinion is proportionate to the extent to which they believe it to be shared by others.

“But what if this signal is distorted?  Extreme views can move into the mainstream when they are legitimised by actual or presumed majority endorsement.   It serves to entrench extreme opinions and make them resilient to change.

“The fact that any opinion, no matter how absurd, will be shared by at least some of the more than one billion Facebook users worldwide creates an opportunity for the emergence of a false consensus effect around any fringe opinion, because the social signal is distorted by global interconnectivity.”

The researchers also note the algorithms used by social media platforms to determine what appears in users’ feeds.  They point to the recent Brexit referendum in the U.K. and the 2016 U.S. presidential election, where highly personalised data was available to political operatives, and was used to open the door to micro-targeting of messages that exploited people's unique vulnerabilities.

Dr Wiesner concluded: “One of our important messages in this paper is that a stabilising feature of a democratic system - opinion exchange - breaks down when this possibility for engagement and debate is destroyed because messages are disseminated in secret, targeting individuals based on their personal vulnerabilities to persuasion, without their knowledge and without the opponent being able to rebut any of those arguments.

“These impacts of social media on public discourse show how democracies can be vulnerable in ways against which institutional structures and historical traditions offer little protection. Complex systems science offers a unique entry point to study such phenomena.”