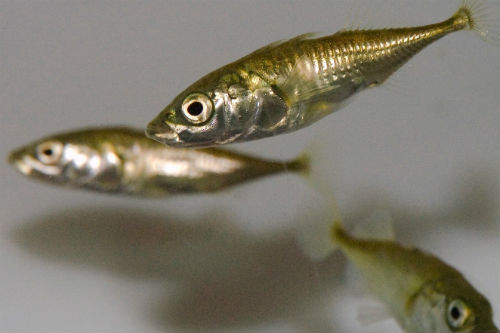 Researchers at the University of Bristol have discovered that more sociable fish suppress their own personality when they are with a partner.

Fish, much like humans, exhibit a wide range of different personalities. Individuals vary in qualities such as how social they are and their willingness to take risk (boldness).

The new study, published today in the journal Proceedings of the Royal Society B, was carried out on three-spined sticklebacks.

At three to four centimetres, these fish are the smallest freshwater fish in the UK and are widespread in ponds, lakes, rivers and estuaries. They are a popular subject for scientists studying animal behaviour due to the variability in their social behaviour, spending long periods both alone and in groups.

The team at Bristol scored the fish as “sociable” or “unsociable”. They then tested the fish for boldness when alone, and who led when the fish were paired up.

The scientists saw that bolder fish, as found before, were more likely to act as leaders.

However, this was only observed less sociable fish.  When looking at more sociable fish, they observed that individual boldness did not affect decision making when in a pair.

In animals, boldness is a personality trait that is often correlated with behaviours such as exploration, aggression and leadership. Leaders of a group often have increased access to encountered food. However, leadership is risky, being a more likely target for predators.

One of the study’s authors, Dr Christos Ioannou from the University of Bristol’s School of Biological Sciences, said: "The study shows that risk taking when alone may not predict riskiness when in a group for the more social individuals, instead they are more likely to conform to what others are doing. It brings into question whether testing individuals alone for risk taking behaviour is relevant.”

Until now, a single personality trait has not been shown to supress other aspects of personality. However, sociability skews bold fish towards conformity. It seems that the benefits of group cohesion, say the researchers, are more important for decision making than the bold behaviour of an individual alone.

The research was funded by the Natural Environment Research Council.

‘Regulation between personality traits: Individual social tendencies modulate whether boldness and leadership are correlated’ by P. Bevan, I. Gosetto, E. Jenkins, I. Barnes and C. Ioannou in Proceedings of the Royal Society B in press, 20180829, 10.1098/rspb.2018.0829