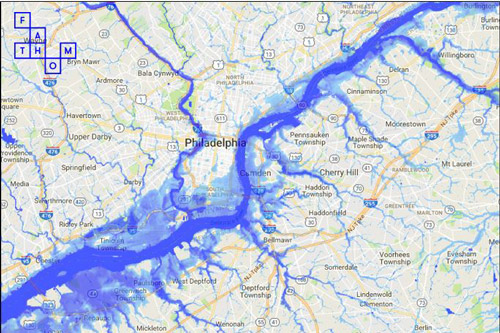 The sample maps showing Philadelphia and Kansas City outline the 1 in 100-year floodplain derived from the model, which simulates flooding in every river basin in the continental U.S. Darker blues indicate deeper water University of Bristol 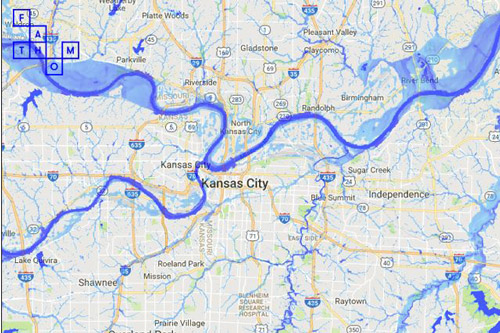 A groundbreaking new study, led by the University of Bristol, has found that 41 million Americans are at risk from flooding rivers, which is more than three times the current estimate—based on regulatory flood maps—of 13 million people.

The study, published today in the journal Environmental Research Letters, is based on a new high-resolution model that maps flood risk across the entire continental United States, whereas the existing regulatory flood maps produced by the Federal Emergency Management Agency (FEMA) cover about 60 percent of the continental U.S.

The increase in numbers of those at risk is a result of the expanded coverage of the map combined with its ability to estimate flooding on small streams—something that wasn’t adequately captured in previous flood-risk models, according to the study’s researchers.

Oliver Wing, the lead researcher behind the study and a PhD student at the University of Bristol’s School of Geographical Sciences, said that not only is the model is able to produce flood risk maps across the country, its level of accuracy on smaller scales—that is, along specific rivers—compares well with FEMA flood maps that presently serve as the primary source of flood hazard data in the U.S.

He added: “We were all surprised by how many Americans we found are exposed to flooding from rivers. It’s particularly worrisome considering that most of these people aren’t even aware of the risk they face. This research will help fill this critical information gap.”

Another key concern, Wing says, is that people continue to build in harm’s way, often without realising they are doing so.

The study—which integrates new maps from the Environmental Protection Agency that more precisely estimate where people live now and where future population growth is expected—predicts that under potential population growth and development projections, more than 60 million Americans may be vulnerable to a 100-year flood by 2050.

Wing added: “Because climate change may cause so-called ‘100-year’ floods to occur more frequently, even more people may be exposed to flooding in the future. All of this highlights the critical need for comprehensive floodplain and flood risk management planning.”

Kris Johnson, a scientist with The Nature Conservancy and co-author of the study, said: “By knowing those places most at risk from floods, we could avoid development in these areas.

“Protecting floodplains or developing them in ways that can withstand flooding—such as flood-tolerant parks—can prevent unnecessary risk to people and help avoid expensive damage to property and infrastructure. Floodplains also store and convey floodwaters, which can help prevent flooding in nearby communities.”

He added: “Floodplains provide high quality habitats for wildlife, they can offer outstanding recreational opportunities for people, and they help improve water quality.

“Protecting and restoring the natural infrastructure of floodplains provides an important complement to built infrastructure like dams and levees. We need comprehensive approaches to reduce the devastating effects that flooding has on so many communities.”

The new study analyzes and identifies only those at risk from flooding from rivers. The estimate of 41 million people does not include the millions of additional Americans that are at risk of coastal flooding.