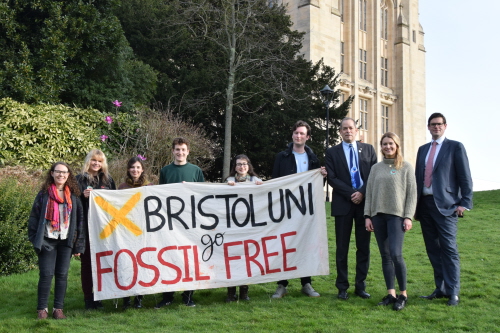 The University of Bristol has today [8 March] announced bold plans to divest its endowment funds from the most carbon intensive sectors of the fossil fuel industry.

Investments in the energy sector will now focus on companies which are having the greatest impact on reducing carbon emissions.

It follows a campaign by the University’s Fossil Free Society, which has praised the new policy for being 'one of the clearest and most wide-ranging in Britain'.

Fossil fuels are non-renewable energy resources, including oil and coal, which release carbon dioxide when they burn, adding to the greenhouse effect and increasing global warming.

As part of this new policy, the university is looking for a fund manager who will seek to reduce the carbon emissions profile of the endowment assets invested in the energy sector.

This will involve active management of the portfolio to bring emissions down by a material amount. The extent of this reduction will be a key factor in the University’s choice of fund manager.

A key aim is to end investment in companies that derive more than five per cent of turnover from the extraction of thermal coal or oil and gas from tar sands by January 2018.

The University has already moved £3 million (five per cent) of its endowment funds into a fund that invests in companies which enhance the environment and life of the communities in which they operate.

Professor Guy Orpen, Deputy Vice-Chancellor of the University of Bristol, said: "We are proud to be a sector-leader in sustainability - from the research we support, the curricula we teach and the student experience we offer, to the way we behave as an organisation. Our new investment policy has been developed to be consistent with our sustainability aims."

The Fossil Free Society, inspired by the international fossil fuel divestment movement, was formed in 2014 by former student Rachel Simon to rally against the University investing in companies whose activities contribute to global warming.

Nick Wood, Head of Research of the Fossil Free Society, said: "Our agreed plan of divestment with the University is one of the clearest and most wide-ranging in Britain, so we’re very pleased. The target on coal and tar sands is very strict, clearly defined and time-limited – the gold standard for divestment targets. How far the University divests from fossil fuels will depend on how this policy is implemented."

Paloma Parkes, Head of the Fossil Free Society, added: "This has demonstrated how far perseverance and environmental commitment can go. We will continue to be involved and will keep pushing for continued improvement."

Local Green Party councillor, Carla Denyer, became involved in the campaign in November 2015 and used her position on the University's Court to propose a motion on divestment at their annual meeting.

Carla said: "In December, the 585 member-strong advisory body called for the Board of Trustees to take immediate action to ensure the University is fossil free by 2021. I am absolutely delighted that the Board took this advice. Over a quarter of UK universities have now made divestment commitments, and I am proud that Bristol is one of them."

The University's Board of Trustees has agreed to new criteria, which include a commitment to:

The development of these criteria has been informed by discussions with staff and students, including those who represent Fossil Free Bristol.

Representatives from the University of Bristol Students' Union (Bristol SU) and University staff will also be involved in the tender process and an annual review which looks at the progress being made in implementing the new policy.

The University's new strategy, launched last year, outlines its commitment to sustainability and addressing social and environmental challenges. A key ambition is to become carbon neutral by 2030, setting an example for the higher education sector.