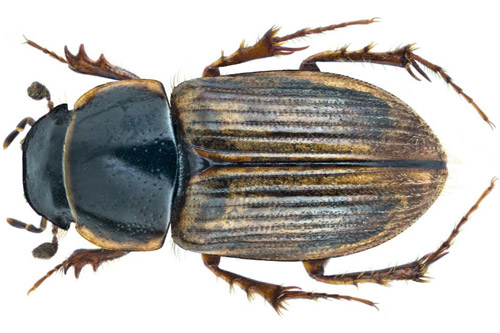 Scientists from the University of Bristol have found that dung beetles can help farmers by reducing the development and survival of parasites in cowpats that cause serious illness in cattle during the summer months.

The study was led by Bryony Sands from the School of Biological Sciences, a NERC-funded PhD student and is published today in the Journal of Applied Ecology.

Artificial cow pats were made using faeces collected elsewhere and were manipulated by adding dung beetles and varying simulated rainfall. After two weeks, parasitic larvae were taken from vegetation surrounding the cow pats.

The numbers of parasitic larvae found on vegetation around pats increased over the first six weeks, and remained high for at least ten weeks.

At first, there were more parasites found around pats that were colonised by dung beetles as opposed to un-colonised pats.

However, after eight weeks, fewer parasitic larvae were found around pats that were colonised by dung beetles. This pattern persisted for the rest of the ten week experiment.

Increased rainfall was achieved by periodically watering the pats. This led to more parasitic larvae being found on the pasture, suggesting that reduced development and survival of livestock parasites as a result of dung beetle activity can be overridden by heavy rainfall.

Bryony Sands said: "Dung beetle conservation is vital for the welfare of our farm animals.

"The conservation of dung beetles on farmland today is extremely important for their role in dung degradation, nutrient cycling, pasture fertility, and because now we have seen that they can contribute to reducing economically deleterious livestock parasites on farms.

"These beetles may be important in cow welfare, as cows are severely affected by parasites found in their intestines."

Current control against parasites involves insecticide chemicals which the cows do not fully digest, resulting in contaminated cow pats.

Bryony Sands added: "These pats are toxic to dung beetles, even though these critters may provide natural control against the same parasites the chemicals are fighting. Controlling parasites is expensive, and these beetles could provide a natural way to keep cows worm-free."

‘Dung beetles reduce livestock gastrointestinal parasite availability on pasture’ by B. Sands and R. Wall in Journal of Applied Ecology.