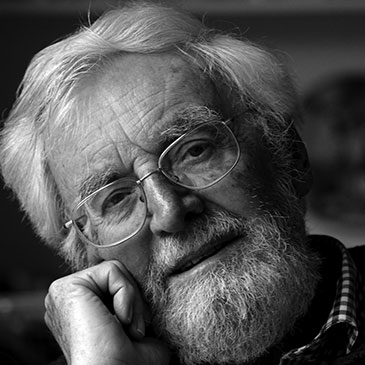 Geoffrey (Geoff) Eglinton, Professor of Organic Geochemistry and Professor Emeritus in the School of Chemistry, then Senior Research Fellow in the School of Earth Sciences, died at home on 11 March after a short illness. His colleague and friend, Professor James Maxwell, offers a remembrance.

As a schoolboy he developed an interest in science, having bought a secondhand book describing details of chemistry experiments. He said recently that he was delighted to have been able to use the book, as it would probably be banned nowadays on the grounds of Health and Safety! He then attended Manchester University and was awarded the degree of PhD in 1951, in the field of organic synthetic chemistry. With his supervisor, Mark Whiting (later of the University of Bristol), he synthesised acetylenic compounds, making the so-called ‘square’ and ‘triangle’, although he ruefully admitted to me once that the latter turned out to be a dimer! Indeed, it is not too widely known that he has an organic chemistry reaction named after him – the ‘Eglinton Reaction’.

After Manchester, he was a postdoctoral fellow at Ohio State University with MS Newman, working on synthetic routes to steroid hormones. On return to the UK in 1952, he was an ICI Fellow at Liverpool University, where he met and married the love of his life, Pamela (Pam), then Secretary to the Dean of the Faculty of Science. In 1954, he was appointed Lecturer in Organic Chemistry at the University of Glasgow. It was during this appointment that decisions were made which would entirely alter and shape his career. At Glasgow, his interest was initially mainly in infrared spectroscopy, but I strongly suspect that he might have thought that this would eventually lead him up a blind alley. During sabbatical leave in 1960 at the University of La Laguna, Tenerife, he began a chemotaxonimical study of plant cuticular wax components by determining the distributions of the alkanes, with one of the very earliest gas chromatographs shipped from Glasgow. Extending such studies led him to start thinking about how these and other organic compounds might survive or not in the sedimentary record and, with Professor CJW Brooks, bringing the first combined gas chromatograph-mass spectrometer to a UK university provided the basis of the analytical approach used nowadays in organic geochemistry. The icing on the cake was a sabbatical leave at the University of California, Berkeley, collaborating with Nobel Laureate Melvin Calvin. There, Geoff coined the term ‘Chemical Fossil’ for a compound whose structure could be related in whole or in part to a compound or compounds in living organisms.

Everything was now in place for a stellar career at Bristol, when he joined the School of Chemistry as Senior Lecturer at the end of 1967 and Head of the Organic Geochemistry Unit, or OGU, becoming Reader in 1968. Retirement in 1993 was anything but retirement, and he moved to the School of Earth Sciences in 1995 as Senior Research Fellow. In a career including over 500 research papers, more than 50 were post-1993 – so much for retirement!

It is difficult to choose examples as highlights from the plethora of Geoff’s achievements. For example, he was a member of the Lunar Sample Analysis Team (LSAPT) at the Manned Spacecraft Center, Houston, Texas. LSAPT was responsible for ensuring how the Apollo 11 samples would be handled and for considering the science which would be carried out. This preceded the first studies of the carbon chemistry of the Moon, whereby it was shown that it is based essentially on the implantation of carbon ions from the solar wind into the lunar surface to form a species behaving chemically like iron carbide, leading in turn to Geoff’s first major award in 1973, the NASA Gold Medal for Scientific Achievement. Likewise, a molecular palaeothermometer approach was developed, based on the distributions of long chain ketones in a group of marine algae, which provides valuable palaeoclimate data, including for situations where other approaches to obtaining temperature information from the geological past are not appropriate. Extension of Geoff’s earlier work on plant wax alkane distributions is now routinely used worldwide by relating these distributions to unravelling aspects of climate change from the records preserved in sediment cores.

It should come as no surprise that these and many other examples of Geoff’s research led to a staggering number of awards and honours. Apart from election as Fellow of the Royal Society in 1976, plus many other Fellowships, and enough medals from learned societies worldwide to start a jeweller’s (!), his achievements culminated in 2008 with the award of the international Dan David Prize, which he received in Israel for science at the same time as Tom Stoppard received the literary version of the Prize (Pam still has Stoppard’s business card!).

So, what kind of man was Geoff? He was slightly shy, but a gentleman and a gentle man, never nasty, and with plenty of boyish charm. In some ways he was an old-fashioned scientist, with an insatiable curiosity in matters scientific; he was a true research animal, full of enthusiasm and brimming with ideas. On the other hand, he was a man well ahead of his time, in that he was a networker par extraordinaire, thereby predicting how so much of academic research is carried out nowadays via networking. Geoff was perhaps not the most organised of people; indeed, he had no wish to be a Head of Department, Dean or Pro Vice-Chancellor, although he was Dean of Graduate studies in the Faculty of Science from 1985 to1988 (but that related indirectly to research!).

In founding the OGU, building it up to become a worldwide centre of excellence and leading it for about 25 years, Geoff certainly started a Bristol dynasty. After the leadership passed to Professor James Maxwell FRS on Geoff’s retirement, the dynasty later continued to go from strength to strength, led by Professor Richard Evershed FRS, along with Professor Rich Pancost.

As Geoff’s health began to deteriorate rapidly, he was comforted by the constant attention and selfless devotion of Pam, who rarely left his side, as well as by frequent visits from his sons, David and Timothy, and their families. Pam and David were at his bedside as he passed away peacefully.