Responding and adapting to climate change 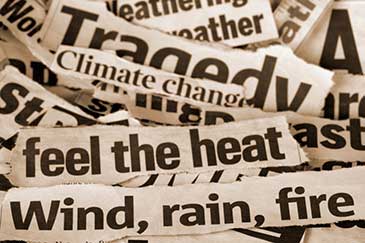 Two prominent researchers, John Cook, whose work has highlighted the strength of the scientific consensus on climate change, and Professor Michael E. Mann, a pivotal figure at the centre of the debate over human-caused climate change, will give public lectures as part of the event.

Professor Stephan Lewandowsky of the University of Bristol, who organised the meeting, said: "Now more than ever, it's important to address these issues.  There's a widespread public perception that uncertainty is an invitation to delay action on climate change, yet recent work suggests that scientific uncertainty actually provides an impetus to engage in mitigative action.  Specifically, the greater the scientific uncertainty, the greater are the risks from climate change under most circumstances."

John Cook of the Global Change Institute, University of Queensland, and author of the Skeptical Science blog, will talk on Dogma vs. consensus: Letting the evidence speak on climate change.

In 2013, he led the Consensus Project, a crowd-sourced effort to complete the most comprehensive analysis of climate research ever conducted, which found that among relevant scientific articles that expressed a position on climate change, 97 per cent endorsed the consensus that humans are causing global warming.

While the research received endorsements from President Obama and an award for 'Best article' from the journal Environmental Research Letters, it was also criticised in hundreds of blog posts, in newspapers including the Wall Street Journal and Boston Globe, and by a number of organisations who deny or reject current science on human-caused climate change.

In his talk, John Cook will discuss his research, both on the 97 per cent consensus and on the cognitive psychology of consensus, and look at the broader issue of scientific consensus and why it generates such intense opposition.

In his talk, The Hockey Stick and the climate wars—the battle continues…,Professor Michael E. Mann will discuss the science, politics, and ethical dimensions of global warming in the context of his own ongoing experiences of the debate over human-caused climate change.

A Distinguished Professor of Meteorology at Penn State University and Director of the Penn State Earth System Science Center, Michael E. Mann is the author of more than 160 peer-reviewed and edited publications.  He has published books include Dire Predictions: Understanding Global Warming and The Hockey Stick and the Climate Wars: Dispatches from the Front Lines and is also a co-founder of the award-winning science website RealClimate.org.

John Cook's Cabot Institute lecture takes place on Friday 19 September, 6pm to 7:30pm, in the Victoria Rooms, Queens Road, Bristol.  The event is free and open to all; to attend, please register at: http://www.bristol.ac.uk/cabot/events/2014/488.html

Professor Mann's special Cabot Institute lecture, in association with the Bristol Festival of Ideas, takes place on Tuesday 23 September 2014, 6pm to 7.30pm in the Victoria Rooms, Queens Road, Bristol.  The event is free and open to all; to attend, please register at: http://www.bristol.ac.uk/cabot/events/2014/488.html

The Cabot Institute at the University of Bristol

This international network of researchers received Research Development Funding from the Worldwide Universities Network (WUN) for the related project “Responding and Adapting to Climate Change: Recognizing and Managing Uncertainty in the Physical, Social, and Public Spheres”. The WUN comprises 16 research-intensive institutions spanning 5 continents working in collaboration to accelerate the creation of knowledge to address issues of global concern.