Pain could be a good thing for heart attack patients 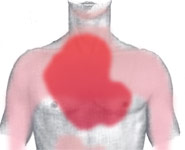 A new study carried out by academics in the University's School of Clinical Sciences has found feeling the pain of a heart attack could actually help the heart minimise damage.

The study, co-funded by the British Heart Foundation (BHF) and the European Union, showed that during a heart attack – when a blood clot blocks an artery serving the heart with oxygen – pain signals from cardiac nerves may help attract stem cells to the site of the blockage to repair some of the damage.

Around 124,000 people in the UK each year have a heart attack (1). The symptoms can include chest pain – a feeling like a belt tightening around your chest. As a blockage cuts off the oxygen supply to the heart, cells die and the heart often suffers permanent damage.

This new study, published in the American Heart Association journal Circulation, shows that a key molecule in the body’s ability to sense pain, called Substance P, is released from nerve terminals in the heart during a heart attack. Substance P then mobilises stem cells from the bone marrow to the site of the artery blockage. The stem cells have the ability to generate new vessels to bypass the blockage and restore some of the blood flow.

After initial experiments in mice, the researchers went on to show that the Substance P released by cardiac nerves may play a role in stem-cell mediated recovery after a heart attack in human patients. The discovery points to a new possible route for future therapies to repair a damaged heart.

Professor Paolo Madeddu, Chair of Experimental Cardiovascular Medicine in the School of Clinical Sciences and Bristol Heart Institute at the University of Bristol, who led the study, said: “After a heart attack, the heart can’t mend itself properly. That’s why tens of thousands of heart attack patients in the UK are affected by the debilitating symptoms of heart failure.

“Our discovery shows that pain receptors are involved in repairing damaged blood vessels, through recruiting stem cells, could point towards new ways to harness the body’s natural mechanisms of repair. The ultimate aim is to develop a therapy which will regenerate the muscle damaged or lost after a heart attack.”

Dr Hélène Wilson, Research Advisor at the British Heart Foundation (BHF), which co-funded the study, said: “Pain is a very complicated process. It’s not just the body’s way of warning you that something is wrong – when we feel pain, it can also be a sign that the body is doing what it can to fix the problem.

“As well as opening up exciting new avenues for new heart repair treatments, this discovery highlights the potential role of pain in our natural response to having a heart attack. The pain of a heart attack is extremely distressing for patients, and we have to do everything we can to keep it to a minimum. But this discovery opens up the possibility that in the future we might be able to harness pain more effectively in the crucial window just after a heart attack, when there could be an opportunity to keep damage to a minimum.”

Paolo Madeddu is Professor of Experimental Cardiovascular Medicine in the School of Clinical Sciences and Bristol Heart Institute at the University of Bristol.

The Bristol Heart Institute (BHI), founded in 1995, consists of over 200 researchers and clinicians, located in the University of Bristol and across Bristol NHS Trusts, who are united in the mission to translate basic scientific research into novel clinical practice thereby improving patient outcome and care. It brings together internationally respected experts from many disciplines of cardiovascular science and disease. Indeed, the BHI is now an internationally recognised centre of excellence for performing interdisciplinary cardiovascular research that takes basic science discoveries into the clinic.

As well as improving collaboration between scientists and clinicians within the BHI, and improving medical treatment of cardiovascular diseases, we also aim to communicate our research findings to the public.

The British Heart Foundation (BHF) is the nation’s heart charity, dedicated to saving lives through pioneering research, patient care, campaigning for change and by providing vital information. But we urgently need help. We rely on donations of time and money to continue our life-saving work. Because together we can beat heart disease.