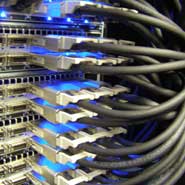 The University of Bristol is to play a key role in a new £3.7million regional centre for supercomputing, which looks set to revolutionise research into important areas such as climate change, drug design and aerospace engineering. It has joined forces with the Universities of Oxford, Southampton and University College London to form a Centre for Innovation to share state-of-the-art equipment and world-leading skills, speeding up the rate at which complex data can be processed.

It has joined forces with the Universities of Oxford, Southampton and University College London to form a Centre for Innovation to share state-of-the-art equipment and world-leading skills, speeding up the rate at which complex data can be processed.

Supercomputers are seen as the “third pillar” of modern research and are used in areas such as quantum physics, weather forecasting, climate research, oil and gas exploration, molecular modelling, finance, engineering and manufacturing.

The award for the Centre of Innovation marks the first significant activity for the e-Infrastructure South Consortium formed by the four universities in 2011. Its aim is to explore and exploit opportunities for the sharing of hardware platforms, applications software, user support services and skills – known as research e-infrastructure - across the four institutions to tackle scientific and industrial research challenges.

The significant contribution High Performance Computing (HPC) makes to the national growth agenda - through supporting new discoveries and driving innovation – has been recognised by the Engineering and Physical Sciences Research Council (EPSRC).

Its funding will allow two significant HPC systems to be procured by the Centre. A 12,000 core Intel Westmere system, to be based at the University of Southampton, can carry out more than 115 trillion calculations per second.

A second system, utilising NVIDIA’s Tesla accelerator technology, will be hosted and operated by The Science and Technology Facilities Council’s e-Science division based at the Rutherford Appleton Laboratories. It will be capable of 247 trillion calculations per second.

The University of Bristol’s existing supercomputer, a £7million facility called BlueCrystal, was introduced in 2008 and is used by more than 600 researchers across the University.

Dr Ian Stewart, Director of Advanced Computing at the University of Bristol, said: "The IBM system at Southampton is very similar in design and layout to the University's own BlueCrystal and will be used to provide extra capacity and capability to our growing community of over 600 researchers and students for whom HPC is an integral part of their work or study.

“The exciting new GPGPU based system will be the second largest of its kind in Europe and will put the University firmly at the forefront of accelerated HPC research."

Computational modelling plays a critical part in drug design. Researchers in the School of Biochemistry are searching for anti-cancer drugs that will prevent secondary tumours developing from breast cancer. By using computer simulation to screen for suitable compounds, rather than undertaking exhaustive screening processes in the laboratory, the most promising compounds can be identified more quickly and become the focus of further research.

Dr Richard Sessions, a Senior Research Fellow in the School of Biochemistry, uses HPC for molecular modelling and said: “The Centre of Innovation will provide state-of-the-art resources to allow scientists involved in modelling and simulation across the disciplines of Biology, Biochemistry, Chemistry, Physics and Engineering to collaborate with colleagues in Maths and Computer Science to understand how best to harness the massive parallelism of modern computer architectures and generate world-class science.”

The importance of HPC to both academic and research endeavours has been recognised by the development and implementation of a strategy for e-infrastructures, which has been funded to the tune of £165million in 2011/12 by the Department for Business Innovation and Skills.

The Engineering and Physical Sciences Research Council (EPSRC) is the UK’s main agency for funding research in engineering and the physical sciences. EPSRC invests around £800m a year in research and postgraduate training, to help the nation handle the next generation of technological change. The areas covered range from information technology to structural engineering, and mathematics to materials science. This research forms the basis for future economic development in the UK and improvements for everyone’s health, lifestyle and culture. EPSRC works alongside other Research Councils with responsibility for other areas of research. The Research Councils work collectively on issues of common concern via Research Councils UK.