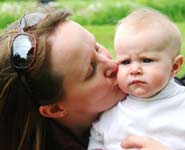 Researchers from Children of the 90s at the University of Bristol, in collaboration with 22 other studies from across the world, have discovered three new genetic variants associated with the skin condition eczema, a chronic inflammatory disease that afflicts millions of patients around the world.

Previous research in Europeans had only identified two major genes, so this is a significant breakthrough that will help diagnose and treat the condition in the long term.

Two of the variants discovered are close to genes (OVOL1 and ACTL9) associated with the skin-barrier function (how porous skin is), while the third is in a region of the genome containing genes important for the immune system (IL4-KIF3A). Thus, the findings underline the importance of both of these biological systems in the development of the condition.

Eczema, which is largely an inherited condition, affects up to one in five children in the UK and other developed countries, with eight out of 10 cases occurring before a child reaches its fifth birthday. Most children undergo remission in early adolescence, but up to 50 per cent may have recurrences in adulthood. Sixty per cent of children who have a parent with eczema also have the condition, rising to 80 per cent when both parents have it. Eczema is commonly associated with food allergy, hay fever, asthma and a range of other diseases. Treatments are limited, which can result in chronic suffering and a heavy economic burden for patients and their families.

Speaking about the findings, which are published online ahead of print today [25 December] in Nature Genetics, lead author, Dr Lavinia Paternoster, from the University of Bristol, said: ‘Eczema has lagged behind other common diseases, in terms of the number of genes discovered that predispose us to the condition. Our study is, to date, the largest study in eczema that attempts to identify which genes play a role. There is still a lot of work to do, but these findings indicate which biological mechanisms are important in this condition and are an important step towards improving diagnosis, management and treatment for eczema sufferers.’

Lead senior author and dermatologist, Professor Stephan Weidinger from the University of Kiel, Germany, added: ‘Two disease genes that we found have never been associated with atopic dermatitis until now, while one has been implicated in asthma, reflecting the close relationship between the two diseases. Our findings will not immediately lead to genetic tests to predict who will develop eczema or to new ways of treatment, but they are an important step forward in this context.’

The research was carried out on around 10,000 cases and 40,000 controls from population-based studies in the UK, Europe, Australia and North America to identify genetic variants from across the entire genome that were associated with eczema. Thus, this is the largest study of its kind on the genetics of eczema to date.

Previous research from Children of the 90s proposed that peanut allergy could be caused by the allergen infiltrating the skin (for example, through creams and lotions containing peanut oil), and confirmed that another skin-barrier gene, filaggrin, was strongly associated with eczema in the population and also with peanut allergy.