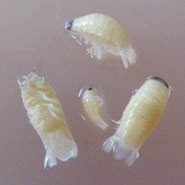 Coral reefs present a treacherous wall of mouths to flea-sized planktonic crustaceans, but the clamour generated by animals on the reef may act like a foghorn to warn them away from danger according to new research from the School of Biological Sciences.

In the first study to examine the response to noise of a diverse range of crustaceans, an international team led by the University of Bristol found that many families of crustaceans previously assumed to be deaf could detect, and avoid, reef noise.

Working at Lizard Island on the Great Barrier Reef, the team collected nearly 700,000 crustaceans, many of which underpin entire marine food webs.  On each of 34 nights, one light trap was attached to an underwater sound system broadcasting a recording of a coral reef, while another identical trap had no playback.  After weeks of sorting in the lab, it became clear that almost all the crustacean groups caught showed a response to the noise, and that their preference depended on their lifestyle.

“We found that that the larvae of crabs and lobsters, who actively search out reefs to set up home, were attracted by the noise,” explains lead author Dr Steve Simpson of the University of Bristol's School of Biological Sciences, “but the crustacean groups that naturally live away from coral reefs actively avoided our traps playing back reef noise.”

The team found a negative response to noise in both crustaceans that spend all their life feeding on plankton, such as woodlouse-like hyperriids, as well as in those that emerge from the sand at night and ascend to feed on plankton near the surface, such as mysid shrimps.  Dr Simpson continued: “This is the first example of animals using coral reef noise as a warning signal, presumably to avoid straying towards what would be extremely dangerous habitat.”

Coral reefs are noisy places, and this noise can be an important cue for animal orientation.  Dr Simpson said: “The combination of clicks, pops, chirps and scrapes produced by resident fish, snapping shrimp, lobsters and urchins can be detected with our hydrophones from many kilometres away.  Our research has already found that reef noise is used by the larvae of fish and even corals to locate and select habitat after their early development in the open ocean, but using noise to avoid reefs, that is a first.”

The mechanism of hearing in these tiny creatures is poorly understood, although co-author Dr Andrew Jeffs and his group from the University of Auckland have found that both tropical and temperate water crabs and lobsters are attracted by the noise of their adult habitat.  Dr Jeffs said: “It is clear that some crustaceans use sounds for orientation, and that noise can induce a downward-swimming response. But this study throws wide open our understanding of crustacean hearing, and much more research is now needed to understand how and what these little critters can hear.”

Published in the journal PLoS ONE, this study provides a further example of just how important the underwater acoustic environment is to marine animals. “The natural underwater soundscape is highly variable, and provides a combined roadmap and early-warning system to a whole variety of animals as they negotiate the opportunities and hazards they encounter,” said Dr Simpson.

Co-author Dr Andy Radford, who is leading a major project in Bristol to investigate the impact of anthropogenic noise on marine animals, said: “This highlights just how damaging the impacts of human noise pollution may be for so many different creatures.  Chronic noise from shipping, drilling and mining may mask crucial natural sounds, causing animals to make poor or even fatal decisions, which in turn will threaten vital fisheries and tourism resources.”