Engineering the chemistry of biology 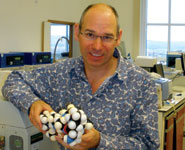 A bundle of five protein helices. It is structures like this that stack end-to-end to make strings of spaghetti-like protein.

Professor Dek Woolfson works at the interface between chemistry and biology, researching into the exciting and potentially controversial field of synthetic biology

Individually, the words ‘synthetic’ and ‘biology’ seem to contradict each other: isn’t biology – life and living organisms – just the opposite of synthetic? Apparently not, for today synthetic biology is a rapidly advancing new field of science. The phrase refers to the design and fabrication of biological components and systems that do not already exist in the natural world, as well as to the redesign and fabrication of existing biological systems. Woolfson is largely interested in understanding how molecules are built and assembled in biology and then applying this to build new molecules with desired functions.

“Synthetic biology is about improving our ability to engineer biology,” says Woolfson, “and to engineer biology you have to understand the underlying chemistry. I don’t think that this takes the wonder out of biology, it just gives us a handle and the tools to get in there and try to understand some of its processes.” Indeed, the first thing Woolfson does when setting out to engineer biology is to sit at a computer to look at the structure and chemistry of natural molecules, particularly proteins. He then asks the question, “What are the important bits of the chemistry that lead to the wonderful 3D structures proteins make and the functions they perform?” It is only when the chemistry has been understood that he ventures into the lab. There he attempts to string together amino-acid building blocks to make synthetic versions of proteins. In his own words: “We look at natural molecules and ask, ‘How does nature do this?’ And then we take those key features and build them into synthetic molecules to mimic the natural ones.”

Specifically, Woolfson is trying to capture features of the materials that hold cells together and which provide the environment to turn collections of cells into tissues such as skin, liver and networks of nerves. This ‘glue’ is called the extracellular matrix (ECM). However, the ECM is made up of large, complicated molecules with lots of different chemistries, so Woolfson began to investigate whether it would be possible to build something similar to ECM, but out of much simpler and more chemically accessible materials. That was 10 years ago. Today he has developed nano-sized proteins that have been designed to ‘self assemble’ into long, spaghetti-like strings, which then become entangled to form a gel. In biology, proteins often self-assemble because one side hates water and the other side likes it, so they naturally stick together in a configuration whereby the water-hating side is protected and hidden by the water-loving side. Woolfson uses this principle to create his molecules and instruct their assembly.

The result is a hydrogel (a gel in which the liquid constituent is water) made up of these tiny, spaghetti-like strings of proteins which acts as a scaffold to support cell growth in much the same way as the ECM does. Furthermore, when people in Woolfson’s group looked at the hydrogel using an electron microscope they saw that the gel had pore sizes of about 200 nanometres, which is approximately the size of pores in the ECM. These nano-scale holes allow nano-scale objects like proteins and nutrients to pass in and out and move around in the gel. Woolfson summarises: “So the first point is that using these protein strings we’ve made a hydrogel in which we can cluster molecules and cells together. Secondly, it’s percolated; it’s got holes in it so proteins can pass in and out. And thirdly, we can manipulate it. Because of the simplicity of our system it’s very easy – in principle – to add a smidgeon of something else that carries a signal that says, for example, ‘turn this cell from a stem cell into something that makes cartilage’. So by using chemistry and self-assembly to build these things, we can add ingredients that make it useful.”

One area the group is particularly interested in is growing nerves. At the moment, if someone has had an operation or injury that results in severed nerves, a nerve is taken from the outside of the foot, where it won’t be greatly missed, and used to replace the damaged one. However, while the potential to grow such important biological components is enormous, the reality is still some way off.

One reason this particular method has such potential is that growing biological components in this way will mean they are biocompatible. So, in principle, once the job of growing new nerve tissue or cartilage has been done, the hydrogel will be broken down by the body, absorbed and disposed of. “When you’re doing this kind of tissue engineering, what you want is to provide a cosy environment in which the cells you introduce can grow to become new tissue, but then you want everything else you put in there to get that going to disappear. You want the body to take over properly and behave as if the new tissue had always been there,” explains Woolfson.

The second advantage of this system is that protein strings don’t necessarily have to be synthesised in the lab – bacteria can be used to produce them. That might sound extraordinary, but the best way of producing protein material is in big fermenters using bacteria. The bacteria are given the gene for a required protein and can be encouraged to just keep on producing it. Furthermore, in this system you know exactly what’s in there, so there are no hidden surprises. In the case of Woolfson’s hydrogels, they are 99.5% water and 0.5% of other things that can be added very precisely in order to alter functionality. “In a nutshell,” concludes Woolfson, “there is almost no limit to what you can use it for.”

All text, images and other content on this website are the copyright of the University of Bristol. You are required to seek permission from the University to reproduce it.