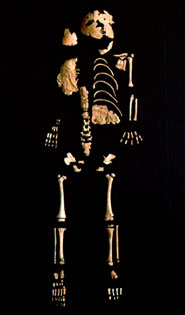 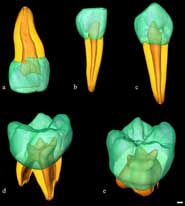 The teeth of a 30,000-year-old child are shedding new light on the evolution of modern humans, thanks to research from the University of Bristol published this week in PNAS.

The teeth are part of the remarkably complete remains of a child found in the Abrigo do Lagar Velho, Portugal and excavated in 1998-9 under the leadership of Professor João Zilhão of the University of Bristol.  Classified as a modern human with Neanderthal ancestry, the child raises controversial questions about how extensively Neanderthals and modern human groups of African descent interbred when they came into contact in Europe.

‘Early modern humans’, whose anatomy is basically similar to that of the human race today, emerged over 50,000 years ago and it has long been the common perception that little has changed in human biology since then.

With this in mind, an international team, including Professor Zilhão, reanalysed the dentition of the Lagar Velho child (all of its deciduous – milk – teeth and almost all of its permanent teeth) to see how they compared to the teeth of Neanderthals, later Pleistocene (12,000-year-old) humans and modern humans.

Employing a technique called micro-tomography which uses x-rays to create cross-sections of 3D-objects, the researchers investigated the relative stages of formation of the developing teeth and the proportions of crown enamel, dentin and pulp in the teeth.

They found that, for a given stage of development of the cheek teeth, the front teeth were relatively delayed in their degree of formation.  Moreover, the front teeth had a greater volume of dentin and pulp but proportionally less enamel than the teeth of recent humans.

The teeth of the Lagar Velho child thus fit the pattern evident in the preceding Neanderthals, and contrast with the teeth of later Pleistocene (12,000-year-old) humans and living modern humans.

Professor Zilhão said: “This new analysis of the Lagar Velho child joins a growing body of information from other early modern human fossils found across Europe (in Mladeč in the Czech Republic, Peştera cu Oase and Peştera Muierii in Romania, and Les Rois in France) that shows these ‘early modern humans’ were ‘modern’ without being ‘fully modern’.  Human anatomical evolution continued after they lived 30,000 to 40,000 years ago.”