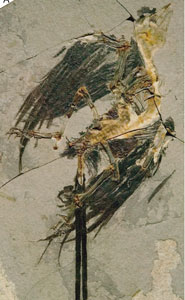 Over 1,000 paleontologists from all over the world will arrive in Bristol, UK, this week to attend an international conference being held at the University of Bristol.

Over 1,000 paleontologists from all over the world will arrive in Bristol, UK, this week to attend an international conference being held at the University of Bristol.

Feathered dinosaurs, fossil giraffes, and the fossil bones of mammoth, bison and woolly rhinos from the bottom of the North Sea, are but a few of the hundreds of exciting new finds that will be revealed during the four days of the conference (23-26 September).

For the first time since its foundation in 1940, the Society of Vertebrate Paleontologists (SVP) will hold its annual meeting outside the Americas. It promises to be the largest-ever gathering of researchers studying fossils of backboned animals. The Society has chosen the University of Bristol as the location for its meeting because of its close ties with the Earth Sciences Department there, to say nothing of Bristol’s spectacular location in the heart of the southwest.

Among the mostly academic, student and museum-based scientists will be 17-year-old school girl Emma Hoffmann from New York who will present her research on the teeth of dromaeosaurid, a bird-like dinosaur.

“I have had a passion for paleontology ever since I took a trip to the American Museum of Natural History in New York City when I was four years old”, said Emma. Her research will help paleontologists develop a more complete picture of dinosaur diversity at many fossil sites where small isolated teeth are commonly found.

Since 2009 is Darwin Year, the meeting will also be a chance for Darwinians to explore the history of evolution and modern responses to Darwin. Special lectures – including one given by Sir David Attenborough (fully booked) – workshops and visits to Darwin locations across England are also planned for the delegates.

2009 also happens to be the centenary anniversary of the University of Bristol.

Professor Mike Benton, Chair of the Host Committee and himself a famous paleontologist, said: “The University of Bristol is very excited to host the 69th Annual Meeting of the Society of Vertebrate Paleontology. This will be a momentous meeting for the Society; the first time it has ever met in the ‘Old World’.”

Professor Blaire Van Valkenburgh, SVP’s president said: “We are delighted to hold our first SVP annual meeting outside of North America in Bristol. We feel it is especially appropriate that we will be in England on the 150th anniversary of the publication of The Origin of Species, given the prominent role played by vertebrate fossils in shaping Darwin’s world view.”