The rocket that thinks it's a jet 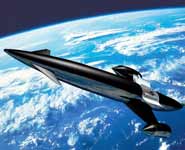 An image of the SKYLON space plane Reaction Engines Ltd

A reusable space plane that can take off from a conventional aircraft runway, carry over 12 tonnes into orbit and return to land on the same runway, could be less than a decade away thanks to engineers at Bristol University and a €1 million award by the European Space Agency (ESA).

A reusable space plane that can take off from a conventional aircraft runway, carry over 12 tonnes into orbit and return to land on the same runway, could be less than a decade away thanks to engineers at Bristol University and a €1 million award by the European Space Agency (ESA).

The project, led by space propulsion experts, Reaction Engines Limited (REL), is part of a joint public and private multi-million pound research programme. The technology, developed by a European team of experts including academics from the University’s Department of Aerospace Engineering, is for the SABRE air-breathing rocket engine, which will power the ‘SKYLON’ space plane.

The SABRE is a unique hybrid engine that can ‘breathe in’ air when in the atmosphere, like a jet engine, and become a rocket engine when in space.  In air-breathing mode, air is first cooled by a revolutionary heat exchanger pre-cooler before being compressed and fed to the rocket engine to be burnt with hydrogen fuel.  When in rocket mode the hydrogen is burnt with liquid oxygen.

Alan Bond, Managing Director of REL, said: “Traditional throw-away rockets costing more than a $100 million per launch are a drag on the growth of this market. The Holy Grail to transform the economics of getting into space is to use a truly re-usable space plane capable of taking off from an airport and climbing directly into space, delivering its satellite payload and automatically returning safely to Earth.“

Years of planning and research by REL on the ‘SKYLON’ vehicle and its unique SABRE air-breathing engine mean that we have an inside track on realising this goal. SKYLON could reduce the cost of getting into space by a factor of ten.”

The demonstration programme will look at three key areas in the engine.

The first area, conducted by REL, concerns the revolutionary pre-cooler that cools the incoming air as it enters the engine.  During the programme a test pre-cooler will be constructed using the actual module design for the flight engines. This will be tested on the company’s B9 jet engine powered experimental facility at Culham in Oxfordshire.

The second area is the cooling of the combustion chamber, where the propellants are mixed and burnt producing water vapour at around 3,000oC.  The SABRE engine uses the air or liquid oxygen as the cooling fluid – a key and unusual design feature as most rocket engines use the hydrogen fuel for cooling instead.  EADS Astrium and DLR in Germany will be conducting this work using demonstration chambers fired at the DLR Lampoldhausen facility.

The third area, led by Dr Neil Taylor in the University’s Department of Aerospace Engineering, will explore advanced exhaust nozzles that can adapt to the ambient atmospheric pressure. This follows on from the successful STERN (Static Test of ED Rocket Nozzle) test rocket programme that was conducted last year. As part of the ESA contract a new water-cooled chamber will be constructed and test fired.

Dr Taylor said: “It’s excellent news, and allows us here to build on the extensive successes we had with the STERN project. If successful, the impact the overall project will have is enormous, and it's really exciting to be in at the beginning of a potential revolution in the space world.”

The demonstration programme has the objective of removing all the outstanding technical concerns on the SABRE engine. This will pave the way to a full engine development programme as part of the overall development of SKYLON.  Cheap, easy and reliable access to space is critical to the development of the global space market, now worth more than $150 billion a year worldwide.

Lord Drayson, Minister for Science and Innovation, said: “This is an example of a British company developing world-beating technology with exciting consequences for the future of space. It is fantastic that Reaction Engines, the British National Space Centre and ESA have successfully secured this public-private partnership arrangement and I look forward to seeing how the project progresses.”