Modern Languages staff get on their bikes for charity

Members of staff from the School of Modern Languages will be taking part in a 'Port to Port Challenge' from Saint-Malo to Cherboug from 4-6 July 2013 to raise money for Leukaemia & Lymphoma Research. 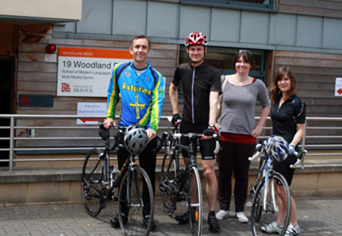 As the likes of Chris Froome and Alberto Contador begin their battle for the cycling’s coveted yellow jersey, four members of University of Bristol staff will be gearing up for their own mini Tour de France to raise money for charity.

Dr Martin Hurcombe, Dr Matthew Brown and Hélène Duranton from the School of Modern Languages, together with Phil Adkins from the International Office, hope to raise £1,000 between them on behalf of Leukaemia & Lymphoma Research.

‘We've chosen Leukaemia & Lymphoma Research as most people know someone who has had to face the battle against a blood cancer at one time or another,’ said Dr Hurcombe. ‘The money people donate will help them in their battle against these diseases.’

With support from Dr Marieke Dubbelboer, also from the School of Modern Languages, the quartet will be cycling around 180 miles in three days (4-6 July) along the coastal road from Saint Malo in Brittany to Cherbourg in Normandy.

For the past four months all four have been training hard, clocking up around 100 miles a week each.

If you'd like to support them, you can find their individual justgiving links below.