Snap happy and healthy: photography winners in the spotlight

Success in the University's 'Picture of Health' photographic competition for Dr Edith Kreutner, teaching associate in the Department of German 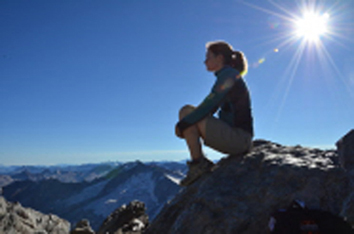 The winners of an inaugural competition to capture the essence of health and wellbeing on camera have been revealed, with staff and students at the University of Bristol exercising their photographic skills to produce some colourful and thought-provoking images.

Dr Edith Kreutner, teaching associate in the Department of German, won second place with her shot entitled 'Feeling on top of the World’ which was taken on Hochfeiler Mountain, situated on the border between Austria and Italy.