The Communication Systems & Networks Group (CSN) has a 30 year track record of performing internationally relevant and industrially impactive research. The Group performs a mixture of theoretical and applied research. Facilities include state of the art test and measurement equipment, channel and system emulators alongside rapid prototyping tools. The Group's hardware and measurement facilities are based in a dedicated research laboratory and office complex in the Merchant Venturers Building. This provides 275 square metres of space for experimental and measurement work. 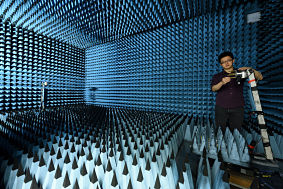 ‌Bristol’s pyramidal-cone anechoic chamber is a key facility for wireless research. The chamber measures 8m x 4.5m x 5m and was designed and certified by Emerson & Cuming. It is served by a 65 GHz Vector Network Analyser, a two-axis positioner and a polarised source that allows the measurement of full 3D complex polarimetric radiation patterns. The facility is able to characterise single antenna elements and arrays over a frequency range from a few hundred MHz to tens of GHz.

‌The group owns two Keysight F8 RF Channel Emulators and these support bi-directional RF links with a path loss dynamic range of 120dB. This facility enables state of the art Wi-Fi, 802.11p, LTE-A and mmWave Hardware In the Loop (HIL) experimentation.  This facility was procured through an EPSRC experimental equipment award. It supports up to 16 independent wireless streams with a bandwidth of 160MHz.  Unique to Bristol’s configuration, the multiple channels can be ‘stacked’ in the frequency domain to facilitate wideband (up to 1GHz) HIL operation. Via mmWave up and down converters the facility is also able to test and optimisation antenna array and beamforming techniques at millimetre wave frequencies. 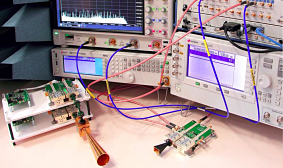 The group has 2 channel sounders, a sub-6GHz multi-channel system and a wideband millimetre wave facility. The former is provided through a Medav RUSK with 120MHz of measurement bandwidth, full remote MIMO operation including AGC and synchronisation, and which supports double-directional channel sounding.  Our world-leading millimetre wave facility is based on a Keysight 12GS/s M8190A Arbitrary Waveform Generator and a MSOS804A Mixed Signal Oscilloscope for waveform detection and capture. Sivars IQ transceivers provide dual channel up and down conversion for operation in the 60-80GHz bands. 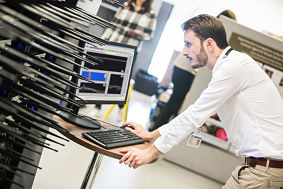 ‌Massive MIMO has quickly established itself as a crucial 5G technology, particularly below 6 GHz where enhanced spectral efficiency is paramount. By focusing on spatial multiplexing, a massive MIMO system can provide a capacity increase in the order of 10-20x (compared to current LTE systems) by serving more users simultaneously in the same frequency resource.  Through close collaboration with Bristol Is Open (a joint venture between the University of Bristol and Bristol City Council), the CSN Group has experimental access to a 128-antenna real-time massive MIMO testbed. This platform is under joint-development with Lund University and National Instruments. Using this system, a team of postgraduate research students set the current world record for spectral efficiency. Our pioneering work in Massive MIMO has been recognised via a number of international awards.

‌The CSN Group has developed a vehicular test facility in collaboration with Bristol City Council, South Gloucestershire Council, AXA, Fusion Processing, Centre for Transport and Society, University of the West of England, University of Bristol, the Bristol Robotics Laboratory and Williams Advanced Engineering.  The CSN Group has designed prototypes of both On- Board Units (OBUs) and Road Side Units (RSUs) that are ITS-G5/DSRC compliant. These are  based on a modular single board design equipped with different transceivers to support a range of radio standards. The platform runs on a customized low-latency Linux distribution. The Group has designed an ITS-G5 communication stack capable of supporting advanced research activities in the domain of Connected Autonomous Vehicles (CAVs) - thus enabling vehicles to exchange what they “can sense” in real time and react to emergency situations. The facility is being used to perform research in areas such as V2X, security, privacy and trust.‌

‌State-of-the-art RF instrumentation to perform linear and nonlinear characterisation of RF power amplifiers up  to 26GHz inlcuding: Source/Load-pull tuners at fundamental frequency up to 12GHz, base-band transmitter characterisation for linearisation and behavioural modelling, and vector signal generation and analysis.