Cabot lunch time lecture: Tackling climate change - what’s the plan, and are we on course?

A Cabot Institute lunchtime lecture with Steve Smith of the Committee on Climate Change.

The UK has traditionally been one of the leading nations in calling for action on global warming. Government has legislated for an 80% reduction in greenhouse gas emissions by 2050, with a system of 5-year carbon budgets to get there. It has also created an independent Committee on Climate Change (CCC) to advise on the budgets and monitor progress towards meeting them.

This talk discussed the CCC’s scientific and economic analysis underpinning the UK emissions targets. It highlighted the key technologies and improvements likely to be needed, and showed that it should cost no more than 1% of national GDP. Steve also took a critical look at whether or not the UK is on track to meet the first few budgets.

Steve Smith is a senior analyst at the CCC where he leads on climate science and global pathways. He is a visiting research scientist with the Met Office, and previously worked at the Parliamentary Office of Science and Technology.

View the slides from the talk. 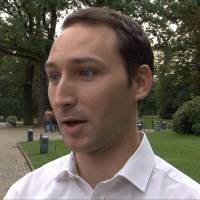