This event has been cancelled.

Explosive volcanic eruptions can produce a number of different hazards that exhibit varying damaging characteristics; much can be learned about their dynamics from the way they interact with buildings and other obstacles such as trees. For many volcanic hazards, dynamic or static pressures are the key force that causes damage, but thermal and chemical damage is becoming increasingly important for susceptible industries such as aviation or nuclear. I will discuss desk-based and field studies I have been involved in that use engineering approaches such as limit state analysis either to forecast damage from a future eruption or to reconstruct hazard dynamics, e.g. pressures, from a previous damaging eruption. With ever increasing populations around active volcanoes, understanding how, or indeed if, we can mitigate damage in high-risk areas is valuable for emergency management planning and disaster risk reduction.

Susanna Jenkins is a volcanologist based in the School of Earth Sciences at the University of Bristol. Her research interests lie in quantifying the potential impact of volcanic eruptions for at-risk communities. Susanna is primarily a geologist who now specialises in numerical hazard modelling, but she has also worked with structural and civil engineers to estimate building, and thus human, vulnerability to volcanic hazards. She uses these estimates and methods to assess damage following previous eruptions and to plan for future eruptions. Research areas include Indonesia, Italy, Philippines, Iceland, Cape Verde and the Caribbean where she contributes to collaborative research projects with international research partners and civil protection agencies.

A failed building on the slopes of Merapi volcano, Indonesia, following a violent explosive eruption in 2010. Limit state analyses have been used to calculate dynamic pressures within a laterally directed pyroclastic density current produced by the volcano in excess of 15 kPa in villages more than 6 km from source.
Image by Susanna Jenkins 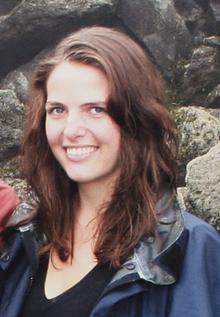 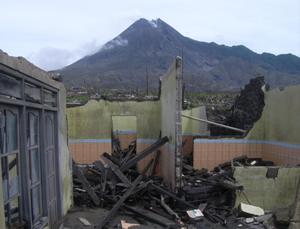 A failed building on the slopes of Merapi volcano, Indonesia, following a violent explosive eruption in 2010. Limit stat