The leading journal in biodiversity conservation – Global Change Biology –currently highlights two papers on bats led by researchers in the School. The current hard copy version includes a study involving Alice Hughes and Gareth Jones where future patterns of bat diversity in Southeast Asia are predicted under a range of climate change scenarios. The study is one of the few to include projected changes in land use as well as climate change to predict changes in biodiversity, and shows that the combined effects of these two factors can be substantial, with only 1–13% of species showed no projected reductions in their current range under bioclimatic scenarios. The journal’s cover illustrates some of the current diversity in Southeast Asian bats with some of Alice’s photographs (below). 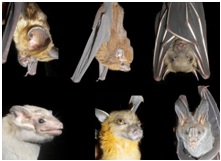 The Global Change Biology website also highlights a paper just published online by Emma Stone, Gareth Jones and Steve Harris on the effects of emerging LED (light-emitting diode) street lights on bat activity.  Artificial lighting is a global threat to biodiversity that can disrupt key animal behaviours such as breeding and foraging. Although LEDs are energy efficient, the ecological impact of the increasing usage LED lights has not yet been assessed. Dr. Emma Stone and her colleagues tested the impact of LED lights on bats and found that LEDs caused a reduction in the activity of two bat species which led to avoidance behaviour. Avoidance behaviour may lead to reduced fitness and reproduction. New lighting strategies should therefore integrate climate change targets with the cultural, social, and ecological impacts of lighting.