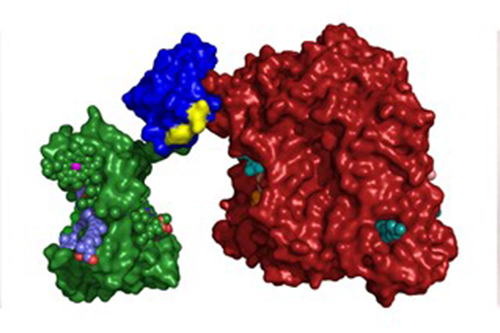 Proteins from a green plant and a purple bacterium are locked together by a genetically-encoded interface domain (blue/yellow).

A team of scientists, led by the University of Bristol, has developed a new photosynthetic protein system enabling an enhanced and more sustainable approach to solar-powered technological devices.

The initiative is part of a broader effort in the field of synthetic biology to use proteins in place of man-made materials which are often scarce, expensive and can be harmful to the environment when the device becomes obsolete.

The aim of the study, published today in Nature Communications, was the development of “chimera” photosynthetic complexes that display poly-chromatic solar energy harvesting.

For the first time, the scientists were able to build a single protein system that uses both chlorophyll and bacteriochlorophyll, and in doing so have demonstrated the two pigment systems can work together to achieve solar energy conversion.

Lead author of the study and Reader in Biochemistry at the University of Bristol, Dr Mike Jones, said:

“We have assembled these two proteins, from very different parts of the photosynthetic world, into a single biological photosystem that enables expanded solar energy harvesting. We have also demonstrated that this system can be interfaced with man-made electrodes to achieve expanded solar-to-electric conversion.”

The scientists, from the University’s BrisSynBio Institute, in collaboration with photoelectrochemistry colleagues at the Free University Amsterdam, purified a ‘reaction centre’ protein from a purple-coloured photosynthetic bacterium and a light-harvesting protein from a green plant (actually made recombinantly in E. coli) and locked them permanently together using a linking domain taken from a second bacterium. The result is the first single complex with a well-defined protein and pigment composition that shows expanded solar energy conversion.

The BBSRC and EPSRC-funded study was largely the work of Dr Juntai Liu, a PhD student in the University of Bristol’s Centre for Doctoral Training in Synthetic Biology. This breakthrough is an example of a synthetic biology approach, treating proteins as components that can be assembled in new and interesting ways using a common and predictable interface.

“This work shows that it is possible to diversify the protein systems which can be built into devices beyond those which nature supplies, using a simple approach achieved purely through genetic encoding,” said Dr Jones.

Dr Jones said the next step was to expand the palette of photosynthetic pigments, using proteins from cyanobacteria that contain bilin pigments that absorb yellow and orange light, and to explore linking enzymes to these novel photosystems in order to use sunlight to power catalysis.

BrisSynBio is a multi-disciplinary research centre that focuses on the biomolecular design and engineering aspects of synthetic biology.

Our overarching aims are to: