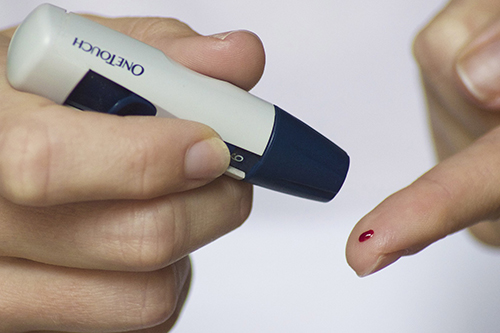 Drugs that repair damage to a gel-like layer in the tiny blood vessels of the heart could present a much-needed treatment for heart failure in people with diabetes, according to University of Bristol-led research funded by the British Heart Foundation and published today in Diabetologia.

The gel-like layer – called the glycocalyx – lines the inside of blood vessels and acts like a sieve to regulate how nutrients move from the blood to the heart and other tissues in the body.

Professor Simon Satchell, Dr Yan Qiu and their team at the University of Bristol looked at mice with type 1 and type 2 diabetes and discovered that the glycocalyx in the small blood vessels of the heart became damaged.

They found that this damage was associated with increased fluid movement into the walls of the heart, leading to swelling and increased stiffness of the heart muscle. This prevented the heart from properly relaxing between beats, meaning the heart could not pump blood around the body effectively.

To see if repairing the glycocalyx improved the function of the heart, diabetic mice were given a substance known to restore the glycocalyx, called angiopoietin 1. At three hours after treatment the researchers found that glycocalyx coverage and thickness had increased in the blood vessels. When they looked at the ultrasound scans of the heart, their ability to relax between beats also improved.

Scientists are now one step closer to better understanding why some people with diabetes develop heart failure, for which there is no cure. Often these people don’t have problems such as high blood pressure or coronary artery disease, which often lead to heart failure. Instead, they have problems with the small blood vessels supplying the heart muscle.

The team plan to identify key changes in the glycocalyx of diabetic patients. Further research is needed to determine whether protecting the glycocalyx from breaking down can lessen heart problems seen in these people.

These findings have far-reaching implications in protecting against other types of organ failure, since the glycocalyx is present in all blood vessels.

Professor James Leiper, the British Heart Foundation Associate Medical Director, said: “This is the first evidence that damage to the glycocalyx in the small vessels of the heart might be involved in diabetic heart failure. The results of this research increase our understanding of the biology underpinning this condition. If these exciting findings from animals can be reproduced in humans, they may identify potential new treatments for patients with diabetic heart failure.”