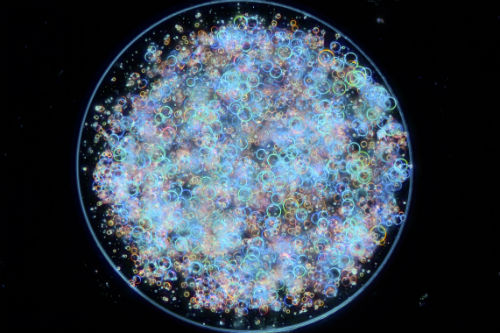 Artificial cells capable of oxygen gas production and chemical signalling have been prepared using a combination of synthetic and biological catalysts through an international collaboration between the University of Bristol and the University of Padua in Italy.

From the synthesis of drugs to the generation of plastics, catalysts – substances that speed up chemical reactions without being consumed – are the backbone of many industrial processes.

Catalysts come in many forms such as inorganic nanoparticles, organic liquids and aqueous enzymes, and can be linked to solid surfaces to increase their performance.

In a new study published in the journal Nature Communications, an international research team, led by University of Bristol chemists, used two different types of catalysts to develop a new type of artificial cell capable of decomposing hydrogen peroxide and generating oxygen.

The team used a ruthenium-based inorganic catalyst in the form of a synthetic enzyme (synzyme) as a membrane structuring agent to generate copious amounts of oxygen bubbles that they then exploited to construct synzyme-driven buoyant microcapsules.

In addition, the natural enzyme horseradish peroxidase was captured inside the protocells so that the synthetic and biological catalysts competed for hydrogen peroxide present in the solution.

The team used the antagonistic arrangement of the two catalysts to implement a rudimentary chemical signalling pathway between members of an artificial protocell community that were dispersed in solution or trapped within small droplets.

Professor Marcella Bonchio, from the University of Padua, said: “As the ruthenium-based catalyst has significant potential in bio-inspired catalysis, it seems feasible that communities of synzyme protocells could provide a step towards synthetic metabolic networks based on light-activated stimuli.”

Professor Stephen Mann from the University of Bristol’s School of Chemistry, added: “Our results highlight a new type of catalytic micro-compartment with multi-functional activity and provide a step towards the development of protocell reaction networks.”