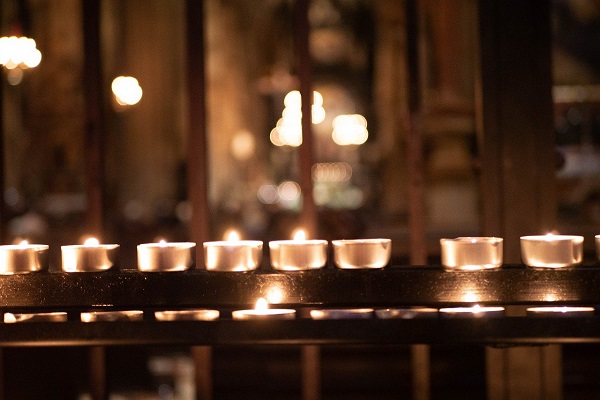 New research has highlighted the difficulties and distress people experienced when trying to get support after the death of a loved one during the pandemic, with more than half of people (51%) experiencing high or severe vulnerability in their grief and those seeking support facing long waiting lists or being told they are ineligible.

The survey, carried out by Cardiff University’s Marie Curie Palliative Care Research Centre and the University of Bristol, found that of bereaved people demonstrating high or severe levels of vulnerability, three quarters (74%) were not accessing formal bereavement services or mental health support.

The majority of people seeking help with their grief said they had struggled to access bereavement services. Of the 40% who tried to get support, just over half experienced difficulties such as long waiting lists, ineligibility or a lack of appropriate support. People also reported discomfort asking for help and were unsure how to access services. The study is funded by the Economic and Social Research Council (ESRC) as part of UK Research and Innovations’s rapid response to COVID-19.

The pre-print publication of the results*, on the MedRxiv website, coincides with a virtual panel event this afternoon to announce the plans and launch of a new UK Commission on Bereavement. The event will include a keynote response to the findings from Nadine Dorries MP, Minister for Bereavement, UK Government and the lead researchers.

The Commission is independent of government and made up of a group of 15 commissioners, chaired by the Bishop of London, the Rt Revd and Rt Hon Dame Sarah Mullally DBE with the aim of reviewing the experiences of, and support available for, people affected by bereavement through and beyond the Covid-19 pandemic, and to make recommendations to key decision-makers, including the UK Government. It will be supported by a steering group of charities including Marie Curie, Independent Age, the National Bereavement Alliance and Childhood Bereavement Network, Cruse Bereavement Care and the Centre for Mental Health.

In the first UK-wide survey of its kind, the results also showed that:

The study found that the pandemic had a major impact on the quality of support for the bereaved and disrupted collective mourning practices which people said compounded feelings of isolation.

Sarah Candlish, 47, experienced the death of her husband (Simon) and mother (Ethel) in the first wave of the pandemic. Her mother was admitted to hospital with Covid-19 and died alone whereas her partner Simon, had stage 3 bladder cancer and died at home with the support of Marie Curie Nurses and Sarah at his side. Speaking of her experience she said: “I wasn’t able to deal with the process of losing mam as I had to make what time I had left with Simon count. Having to care for Simon and arrange my mam’s funeral at the same time was just awful knowing I would be doing the very same for Simon very soon.

“I wasn’t able to see her in hospital in the final two weeks of her life. It makes it feel like it never happened and I always thought I’d be with my mam when she died. It’s left me with a lot of guilt thinking, should I have done more? When you get told someone has died and you’re not with them and you can’t see them, it’s really hard. There wasn’t a body to see so it’s hard to grasp that they’ve gone. It still doesn’t feel real for me.

“It was all so disrupted and I couldn’t take comfort from people being around and talking to me about her so when she died, she just died. There wasn’t any processing of the grief. I spoke to friends over text and the phone, but there wasn’t any cuddling or face-to-face conversations. There wasn’t the physical presence of people which has delayed my grief. It’s been a year now and I feel stuck.

“For people dealing with grief now, there needs to be quicker access to services. The waits are too long and there needs to be more literature. You need to be handed something with everything in, with all the signposting to the different services. For me, losing my mam feels as intense as losing a child as towards the end I was more like the parent than the child in our relationship. But in society, losing a parent is expected and so sometimes I feel like I can’t express the full intensity of my grief. It’s like a massive void, as great as losing a child. People say it’s the natural order of things but it doesn’t feel natural at all.”

Dr Emily Harrop, from the Marie Curie Palliative Care Research Centre based at Cardiff University, said: “It is incredibly upsetting to know that even when people did reach out to access support they desperately needed, they still faced difficulties such as long waiting lists or being told they are ineligible. We really need politicians and policy-makers to take a thorough look at how we can make changes to support people both before and after a death in the future.”

“The survey results show that many people faced significant challenges in dealing with bereavement during the pandemic and highlights that more awareness of support options, information on grief and bereavement services should be provided proactively following a death and made available online and in the community.”

Dr Lucy Selman, from the Palliative and End of Life Care Research Group and the Centre for Academic Primary Care at the University of Bristol, said: “The pandemic is going to impact on millions of people’s grief for many years to come. It is imperative we ensure that bereaved people receive the correct support for their needs to prevent prolonged grief disorder and other problems. Findings highlight an important role for GPs in responding to high-level needs for emotional support among bereaved people and signposting to local and national bereavement services.

“We hope that the publication of these results and the launch of the UK Commission on Bereavement will provide an opportunity to implement some of our recommendations to improve end of life care and bereavement support, and that those in power will help make the necessary changes.”

Speaking about the launch of the UK Commission on Bereavement and as chair of the group, the Bishop of London, the Rt Revd and Rt Hon Dame Sarah Mullally DBE, said: The pandemic has challenged and changed all our lives. For those whose loved ones have died during this time life has changed the most. With hundreds of thousands more people facing bereavement, Covid-19 has had a profound impact on how those affected have experienced grief.

“To have to choose a very small number of people to be present at a loved one’s funeral, not to be able to hug and to hold one another, to be unable to gather with a large group of family and friends in someone’s home or a restaurant or pub afterwards is another series of losses, heaped on top of the raw grief. In some cases this has included the additional trauma of having been physically separated from the person we love as they have died.

“In the wake of so much loss, we now risk a post-pandemic bereavement crisis. Today’s report reveals just how widespread and serious the impact has been. The UK Commission on Bereavement has been established to explore these issues and will make recommendations on how better to support bereaved people now and in the future.”

Researchers at Cardiff University and the University of Bristol, including a team from the Marie Curie Palliative Care Research Centre, conducted the research to give a voice to the experiences of people bereaved in the UK of any cause from 16 March 2020 up until 5 January 2021. The team has now released initial findings from the analysis of 711 respondents to the survey and provided recommendations for future policies and practices.

Recommendations from the researchers for future policy and practice:

Paper: Support needs and barriers to accessing support: Baseline results of a mixed-methods national survey of people bereaved during the COVID-19 pandemic by Emily Harrop et al. Pre-print published in MedRxiv. Please note this is a preprint, so it is a preliminary piece of research that has not yet been through peer review and has not been published in a scientific journal – so this is early data.

For more information on the UK Commission on Bereavement visit: https://bereavementcommission.mariecurie.org.uk/professionals/uk-commission-bereavement