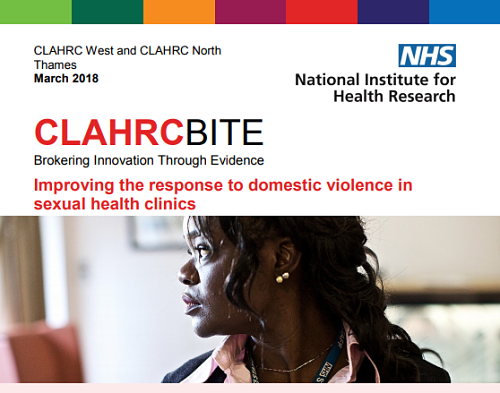 The findings of the joint NIHR CLAHRC West and North Thames study of the IRIS ADViSE pilot, which aimed to improve sexual health professionals’ response to women who have experienced domestic violence, are now available as a CLAHRC BITE and BMJ STI podcast.

Women who have experienced domestic violence and abuse (DVA) are three times more likely to have gynaecological and sexual health problems such as sexually transmitted infections, urinary tract infections and unintended pregnancy. Forty-seven per cent of women attending sexual health services will have experienced DVA at some point in their lives.

These services can be the first point of contact for women who have experienced DVA, so sexual health practitioners can have a key role in supporting women to access advocacy services. But most sexual health professionals haven’t had much training in identifying and responding to DVA, despite National Institute for Health and Care Excellence (NICE) recommendations. The IRIS (Identification and Referral to Improve Safety) programme is an evidence-based training intervention for general practice staff to identify, respond and appropriately refer women who are experiencing DVA. It is available to be commissioned locally and is being implemented in general practices in over 30 areas nationwide. IRIS ADViSE (Assessing for Domestic Violence in Sexual Health Environments) adapts the IRIS approach for sexual health staff.

This project looked at the feasibility and acceptability of the IRIS ADViSE pilot in sexual health clinics in Bristol and East London. The pilot aimed to encourage sexual health staff to ask patients whether they were experiencing DVA, and to make referrals to specialist services.

In the east London clinic over seven weeks:

In the Bristol clinic over 12 weeks:

During the three months before the pilot started, there were no referrals to DVA specialist services at either site.

All the people we interviewed felt that asking about and referring women on to DVA services was appropriate and valuable in a sexual health setting. They responded favourably to the training and felt more confident about asking about DVA and managing disclosures.

Staff said that patients “welcomed being asked about it, even if they've not ever been involved in an incident of domestic abuse themselves, that they appreciate that people are asking that question.”

The staff reported that some disclosures were considered relatively simple and easy to handle, where patients can be easily referred to the partner DVA organisation or given information.

However, cases with an immediate risk of harm to the patient or their children were more complex in terms of managing the patient’s wishes and navigating existing safeguarding procedures. This added to staff’s already limited time and busy workloads.

“Sexual health staff are definitely supportive of asking their patients about domestic violence and abuse. But it’s crucial that they have support to do so, as these patients must be dealt with sensitively and referred on appropriately.

The study shows that it is feasible and acceptable to develop and implement the IRIS ADViSE training and referral package for sexual health clinics. At the policy and commissioning level, stronger recognition of the issues around DVA referrals, and more resources to support them, are needed. Commissioners and local NHS trusts need to engage and commit to financially support IRIS ADViSE to maximise its potential.

The Centre for Academic Primary Care (CAPC) at the University of Bristol is a leading centre for primary care research in the UK, one of nine forming the NIHR School for Primary Care Research. It sits within Bristol Medical School, an internationally recognised centre of excellence for population health research and teaching. Follow us on Twitter: @capcbristol

Established by the Department of Health, the NIHR: