The example projects listed below show the broad spectrum of subjects covered by the BCFN, and is illustrative of the interdisciplinarity offered by the Centre. When students come to select their projects, the options are much more extensive than those listed here.

Diamond films grown by chemical vapour deposition (CVD) are finding an increasing number of applications due to the superlative properties of diamond coupled with their rising availability and affordability from a number of commercial suppliers.  Doping the diamond with boron allows p-type diamond to be deposited, with films ranging in conductivity from highly insulating to near metallic or even superconducting, and this has allowed many simple p-type devices, such as sensors, to be fabricated.  In contrast, finding a dopant for diamond that imparts n-type semiconducting characteristics suitable for use in electronic devices has proven to be elusive.  Nitrogen forms donor levels which are too deep to be electrically useful, and most of the other possible dopants (P, As, Sb) are too large to replace C in the diamond lattice by substitution to any extent.

However, a new technique, pioneered at Bristol, has opened the door to a number of other potential dopants.  In this technique, a suspension of the dopant compound in a solvent is drop-cast onto the diamond surface, and then heated in the CVD chamber for an hour to force the dopant atoms to diffuse into the diamond.  Depositing a thin layer of diamond on top of this then encapsulates the dopant inside the diamond film.  To date we have studied in-diffusion of lithium, using Li3N as the source.  This was diffused into both N-containing and B-containing diamond, in order to create a co-doped system, whereby the concentration of donors and acceptors can be tailored by the ratio of p-type to n-type donors in the film.  The films were analysed by SIMS, and although we managed to incorporate nearly 1% of Li, the films remained electrically inactive.  So the search is now on to find a suitable element which, when in-diffused in this way, will act as an n-type dopant, maybe with or without other dopants such as N or B being present.  Solving this issue is the ‘Holy Grail’ of diamond research, since an n-type semiconducting diamond layer would finally allow a multitude of diamond-based electronics to be realised, from simple pn-junctions to CMOS-like microprocessors.

Towards a dynamical acoustical assembler

In recent work with the BCFN we have taken the basic concept of an acoustic manipulation and assembly device to the point where we have demonstrated real applications in chemical assembly. This is perhaps best highlighted by the recent article "Spontaneous assembly of chemically encoded two-dimensional coacervate droplet arrays by acoustic wave patterning" in Nature Communications [1].

In the current devices ultrasonic standing waves in a fluid are used to position particles or guide the formation of droplets onto an ordered square array. Different lattices may be produced (for example hexagonal) by changes in the position and orientation of planar transducers.

In this project we would like to take the capabilities of these devices a step further. In principle by using multiple sources (ultrasonic transducers) it should be possible to arbitrary wave fields whose complexity is limited only by the number of sources and the ability to control them. This should be feasible technically although building transducer arrays and driving and controlling their phases at frequencies in excess of 5 MHz is very challenging.

In the initial part of the project we wish to demonstrate that this approach may be used to produce arbitrary patterned arrays of particles in a similar way to what we have achieved so far with single transducers. However, an important goal of the project is to move away from using a fixed plate to one in which the phases may be controlled electronically. In principle phase change materials such as Germanium-Antimony-Tellurium (GST) could provide this functionality as not only are the electronic properties of dependence on the state (amorphous or crystalline) of the material but also the velocity of sound [3]. In this way, with an appropriate layer thickness phase variation is in principle achievable from an electronically addressable device. The principle could also be used to control the acoustical field by reflection of a plane wave front from a similar controlled surface. It may be that GST is not the optimum material to use and part of the project would be go look for better alternative materials.  Very recently a similar technique using an opto-acoustic system [4] to generate the arbitrary field has been demonstrated but we believe that the technique proposed here would have advantages in control.‌

Nature excels at making intricate structures which often derive their strength from a hierarchical organisation of matter. Here we focus on the building materials of the human body, bone and cartilage. Repair of injured and worn body parts traditionally involves surgery and is putting the National Health Service under great pressure servicing the needs of an ageing population. It is therefore desirable to introduce tissue engineering to minimise the need for surgical intervention.

There has been work already on injectable materials that gel on increase of pH. Classic particle gels have a rather different structure however from bone or cartilage. We have recently discovered a new class of hierarchical hydrogels in mixtures of temperature responsive polymer particles. Samples that are fluid at room temperature formed remarkably strong gels on heating to around 35 ºC (so would be in the gelled state at body temperature).

Moreover initial fluorescent imaging suggest the structure we obtain is quite distinct from traditional particle gels – with fine “strands” interconnecting, similar to the structure of natural building materials.

Here we plan to explore what control we have over structure, across a range of length scales, by manipulating concentrations of two components. We will take advantage of the possibility of applying different fluorescent labels to the two species involved, combined with super-resolution imaging technique (STED microscopy), to unravel the nanoscale structure of hierarchical gel networks. We will complement the real-space characterisation with small-angle X-ray scattering to probe the nanometer-scale structure. This project will be interdisciplinary and will in any case involve chemistry (particle preparation), physics (microscopy and X-ray scattering) and computing (image analysis).

A recent paper published in February 2016 (see; http://elifesciences.org/content/5/e12620v1) has uncovered a primitive form of light sensitivity in unicellular blue-green cyanobacteria. Each bacterium acts as small spherical lens that focuses light onto a spot on the back of the cell membrane, akin to a microscopic eyeball. Light sensitive molecules (photoreceptors) in the cell membrane respond to the focused light spot, and initiate a signaling gradient that is transduced into directional movement towards the light (phototaxis).

Inspired by these observations, how can we use nanomaterials self-assembly to prepare microscopic eyeballs in the lab, and exploit their light-focusing properties for directional motion of artificial cells?

Recent studies in the Mann lab on synthetic protocells(http://www.bristolprotolife.co.uk) have demonstrated that new types of semi-permeable spherical microcapsules (colloidosomes, proteinosomes) can be prepared by the spontaneous self-assembly of inorganic nanoparticles or protein-polymer nanoconjugates [Li et al, 2014].

Studies in the Roberts lab (http://www.ecologyofvision.com) have developed a set of tools for calculating and measuring the optical properties of microscopic sized droplets. Here, the lab has used finite difference time domain modeling (FDTD) and digital holographic microscopy (DHM) to investigate how oil droplets in the retina of many vertebrates optically function [Wilby et al. 2015].

By combining these skills from the two groups we predict that we can tune the size of the protocells, along with their membrane composition (refractive index) and membrane thickness, to develop new microstructures with appropriate optical properties such that they act as discrete microscale lenses. If so, this would provide a first step towards a phototactic protocell.‌ 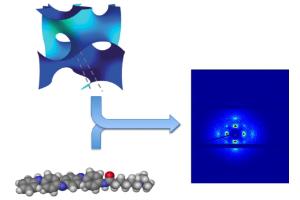 Self-assembly of amphiphiles is a robust, bottom up fabrication strategy for functional materials, however lacks order over macroscopic length scales, for example in electro-active materials, can affect long-range diffusion and transport properties. Here, a biological amphiphile is aligned using shear and used as a template to direct the assembly of electroactive amphiphiles based on tetra(aniline) (TANI), producing highly ordered, nanostructured, electroactive materials with long-range orientation for use as electrodes in energy storage systems such as supercapacitors.

Nanomaterials for the Life Sciences

Chlorhexidine (CHX) is a broad spectrum biocide, and kills a wide range of bacteria and fungi. It has been in widespread use in medicine, dentistry and veterinary care since the 1960s, and remains popular with clinicians owing to its efficacy and safety. It is used to cleanse skin prior to surgery, as a component of wound dressings, as a medicated mouthrinse, and for treating skin conditions in dogs and cats.

CHX is very useful, but it has one major drawback. The CHX used in all current products is CHX digluconate (CHXdg), a highly soluble salt. This means it can be applied as an aqueous solution, but the active CHX is rapidly removed, for instance by sweat, bathing, or abrasion by clothes. To attain anything but very short term antimicrobial efficacy, the CHXdg has to be reapplied regularly, but in many instances this is impractical or ineffective.

CHX-HMP has many applications in human and veterinary medicine. Two previous BCFN PhD projects have focussed on particular uses of the material: One to develop an antimicrobial venous catheter material that can prevent catheter-related blood stream infection, including by antibiotic-resistant microbes (1), and one to create a coating for dental implants which are frequently the site of post-operative infection (3, 6). Other projects are ongoing, such as the use of CHX-HMP as a topical agent to prevent infection of the umbilical cord in newborn babies in the developing world.

The aim of the EP will be to first elucidate the mechanism of CHX release from CHX-HMP and, particularly, to establish what phosphate species are released concurrent with the CHX. This will be followed by investigations to establish the effect of the phosphate species on model membranes, model vesicles and microbial cells. These findings will then be used to inform studies of the evolution of resistance in Staphylococcus aureus on exposure to CHX, CHX-HMP and appropriate controls. The project will be conducted across three faculties of the University as well as at Pertinax’s brand new premises and thus presents a genuine real-world interdisciplinary challenge in nanomaterials for health!

Control of Polymorphism in Pharmaceuticals

Simon Hall’s group have recently discovered an entirely new way to control the growth of crystal polymorphs, by using strong magnetic fields (Figure 1) [1]. This has opened up the possibility of applying our technique to an enormous range of material types. In this project, we will use our method to induce polymorphism in a range of crystals identified as pharmaceuticals.  Using a range of magnetic fields, the goals are to discover new and potentially more efficacious polymorphs of known drugs and to identify the correlation between magnetic field strength and the polymorph produced. We choose pharmaceuticals as Dr Hall has recently been awarded a £2.6M grant from the European Union to target 12 of the most high-profile, high-worth generic drugs with the aim of controllably synthesizing the desired polymorph of each (the lowest-energy polymorph and/or most processable form with desired properties). With these 12 representative generic drug molecules responsible for €18 billion of sales per year worldwide, and the development of many new pharmaceuticals being hampered by solid form issues, control over the production of the most pharmaceutically desired crystal is a truly paradigm-shifting prospect.  For this endeavor and this project proposal we have the support and guidance of one of the largest pharmaceutical companies in the world.‌