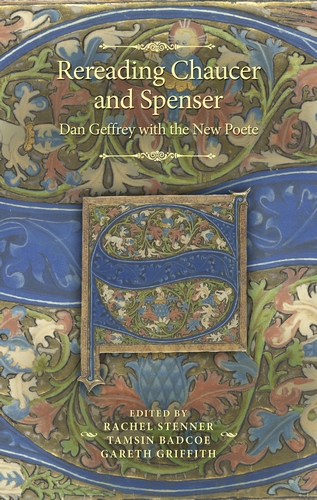 Rereading Chaucer and Spenser: Dan Geffrey with the New Poete, edited by University of Bristol English department members Dr Tamsin Badcoe and Dr Gareth Griffith, and by Dr Rachel Stenner, a former PhD student in the department and now a lecturer at the University of Sussex, has been published by Manchester University Press. The volume, which contains twelve essays, including one by Dr Griffith, and an introduction by all three editors, brings together established and early career scholars to provide new critical approaches to the relationship between Geoffrey Chaucer and Edmund Spenser. It developed out of a major conference on the topic held at the University of Bristol in 2014.

By reading one of the greatest poets of the Middle Ages alongside one of the greatest poets of the English Renaissance, the collection poses questions about poetic authority, influence, and the nature of intertextual relations in a more wide-ranging manner than ever before. With its dual focus on authors from periods often conceived as radically separate, it also responds to current interests in periodisation. This approach will engage academics, researchers and students of Medieval and Early Modern culture.