A selection of final year projects to show how Engineering Mathematics can tackle a wide variety of real-world problems.

Tracking and suppressing flutter in an aerofoil.
Project Summary

Music has been an integral aspect of societies and cultures across the globe for millennia. It can convey powerful messages, evoke emotional responses and even affect our physiological rhythms. For those with hearing impairment or deafness, it is difficult to experience music in the acoustic sense. Hence the motivation for this project: to create a novel prototype wearable device to communicate music via tactile sensory input. The project was Alice’s original idea, successfully blending her interests in mathematics, physics, psychology, AI and robotics and showcasing her interdisciplinary and co-creative mindset.

Over the course of her final year, Alice designed, built and tested a wearable tactile device. She generated mappings from audio tracks to vibration patterns, and used her prototype to successfully elicit a range of responses. Moreover, she demonstrated potential for a more sophisticated device capable of engendering emotions, either as a new medium or as a substitute for acoustic music. Her ambitious experiment took the first step to formally explore the perceptual space of tactile music. It expanded our understanding of sensory substitution.

Alice is working towards her PhD in Engineering Mathematics, studying morphable technology to transform interactions.

Matt Collins: Learning from the crowd to design nanoparticles for cancer treatment

The fight against cancer is ongoing. Many novel treatment methodologies are being developed that aim to improve life expectancy while minimising side effects. One new approach is to inject nanoparticles into the blood stream to target cancerous cells without any negative impact on healthy cells. Such therapies are still in their early stages. One of the greatest unsolved challenges is how to design the nanoparticles so that vast numbers of them can work effectively together.

The starting point of Matt’s project was an online game, NanoDoc, which allows bioengineers and the general public to create and test nanoparticle designs in simulation, using the power of crowdsourcing to find suitable treatments. He proposed an artificial intelligence technique, which, when trained on data from NanoDoc, could identify weaknesses in the prediction of successful treatment and how to fix them. Better still, his project showed how to successfully engineer nanoparticles beyond those found in the NanoDoc simulations, hence reducing the time taken to find the right nanoparticle designs.

Matt went on to work as a consultant at the European information technology consultancy company Sopra Steria.

Pollutants ranging from toxic spillage from power plants, to general household waste are routinely discarded into the oceans. Large patches of waste trapped in ocean vortices have been discovered: the "Eastern Garbage Patch" is an area of rubbish approximately the size of Texas trapped by the North Pacific sub-tropical gyre. Such accumulations of pollutants have wide-ranging negative impacts. For example, the addition of excess nutrients into a marine environment can result in regions that are unable to support life – over 400 such dead zones are believed to exist.

The aim of Chloe's project was to propose techniques that could find which areas of the ocean have a high dispersion of pollutants and which do not, with a view to identifying regions where depositing waste should be avoided. She developed a range of different methods, using disparate big data sources. These included publicly available sea surface height data, as well as satellite data velocities of ocean currents. By combining techniques, she was able to automatically identify the vortices that trap pollutants, and thereby find appropriate points and paths that would result in a large spread and safe dispersal.

Chloe went on to a job with PwC.

Jiri Klein: Tracking the onset of flutter in an aerofoil

Despite extensive modelling and design work, aeroplanes can encounter an instability known as flutter, caused by feedback between flexure of an aerodynamic surface and the surrounding airflow. The consequences of flutter can be severe, potentially leading to complete destruction of an aircraft in flight, as in Braniff Flight 542. In order to identify and correct such instabilities, new aircraft designs must undergo extensive in-flight testing, as mathematical models alone are not yet trusted because of the difficulties of incorporating the nonlinear behaviour that underpins them.

Jiri's project sought to model the dynamics and bifurcations of an aerofoil. The aim was to put the nonlinear phenomenon of flutter on a sound footing, and to suggest ways of controlling it, with the help of rigorous mathematical and data analysis. Not only was his model able to fully reproduce experimentally verified behaviour from a wind tunnel experiment, but also to suggest innovative ways to suppress aerofoil instability, either by changing parameters or by adding a control surface such as a trailing edge flap.

Jiri went on to work as a Forensic Technology Associate with Deloitte UK after securing a position part way through his final year. 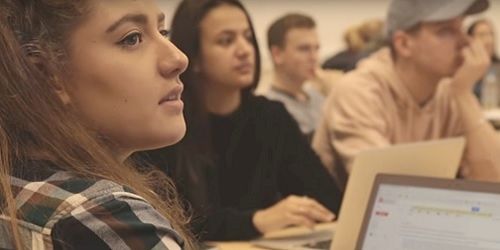