Stat-JR is a general purpose statistical package with wide-ranging and flexible functionality. Its features include:

Ability to communicate with other statistical software

A choice of interfaces

The figure below gives an overview of how the system works: 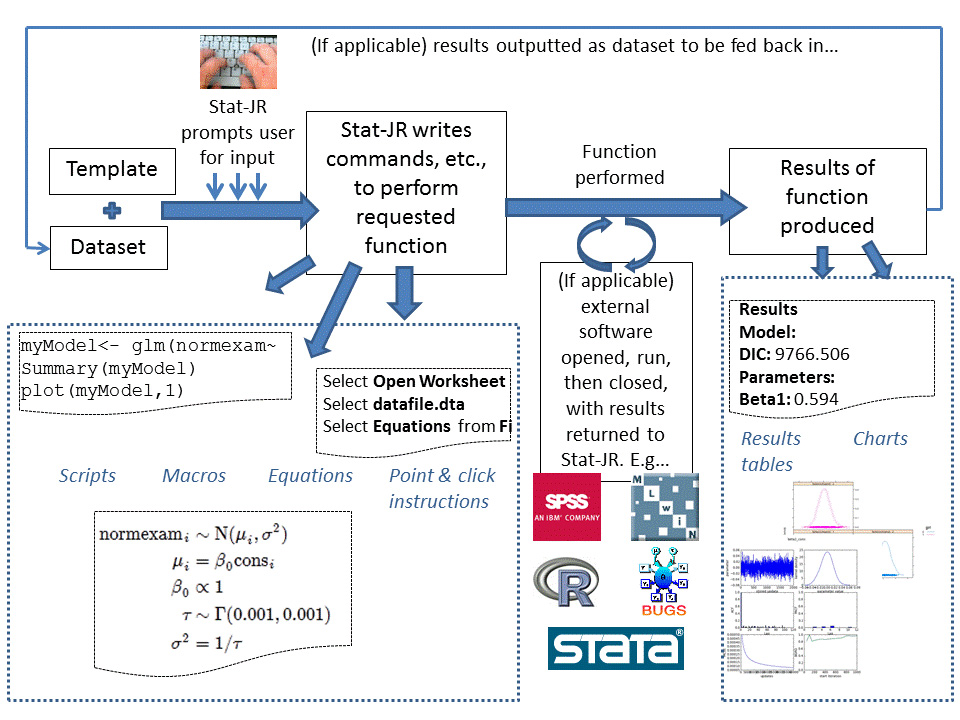 Screenshots of the TREE interface

Stat-JR uses a modular system of templates, each defining a certain function: some fit models, others plot charts, some produce data summaries, and so on:

Once the user has chosen a template (and dataset), inputs specific to those choices are then entered: 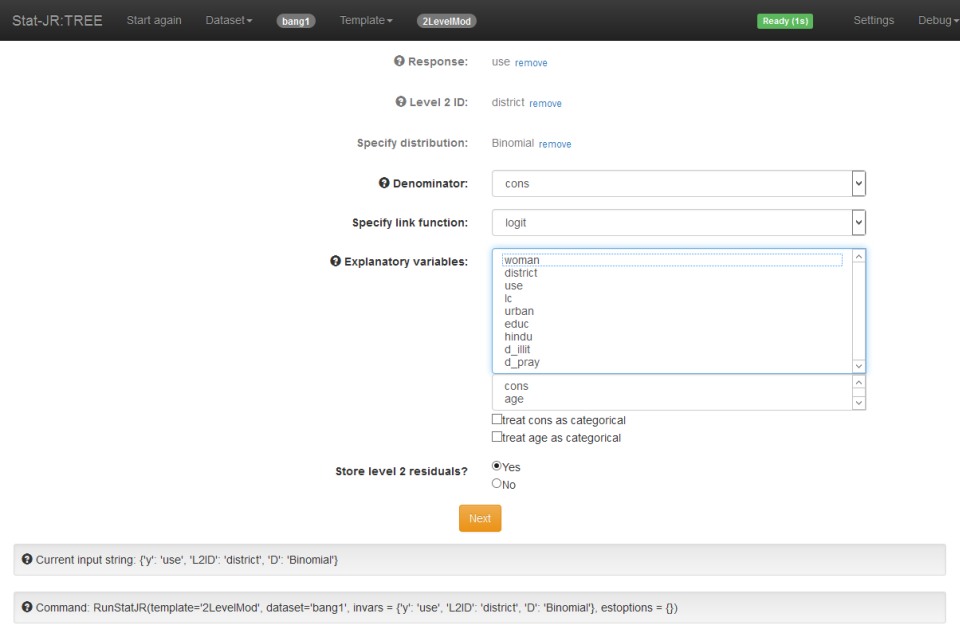 Having specified all the inputs the template requests, Stat-JR produces the files it needs to complete the desired execution, together with useful descriptive resources such as equations (LaTeX): 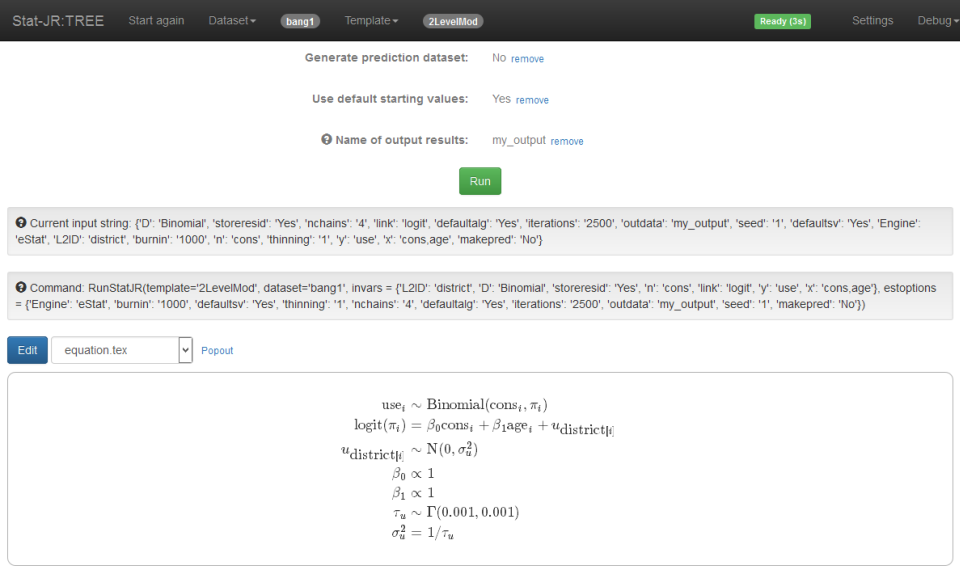 Once the desired execution has run, the final output files are returned; here we see some model results (other outputs would be accessible via the drop-down list just above the output pane): 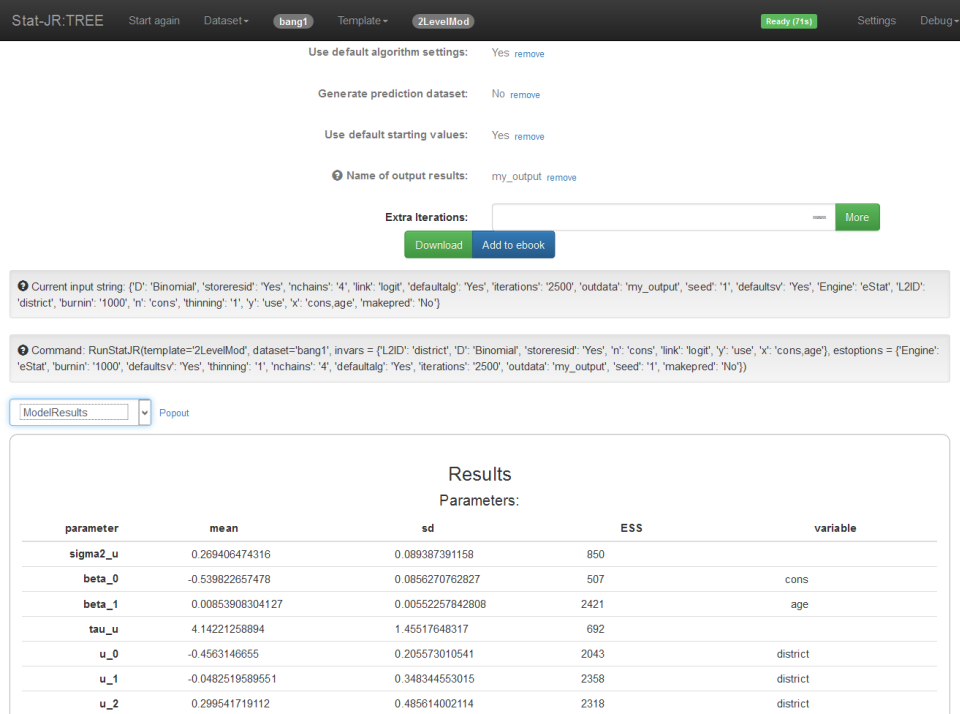 Screenshots of the DEEP interface

The content of the eBook can be dictated by choices the user has made as he/she is reading through; here the user has chosen the fixed effects for a model which, for comparison, is fitted both with, and without, random effects for school (at level 2): 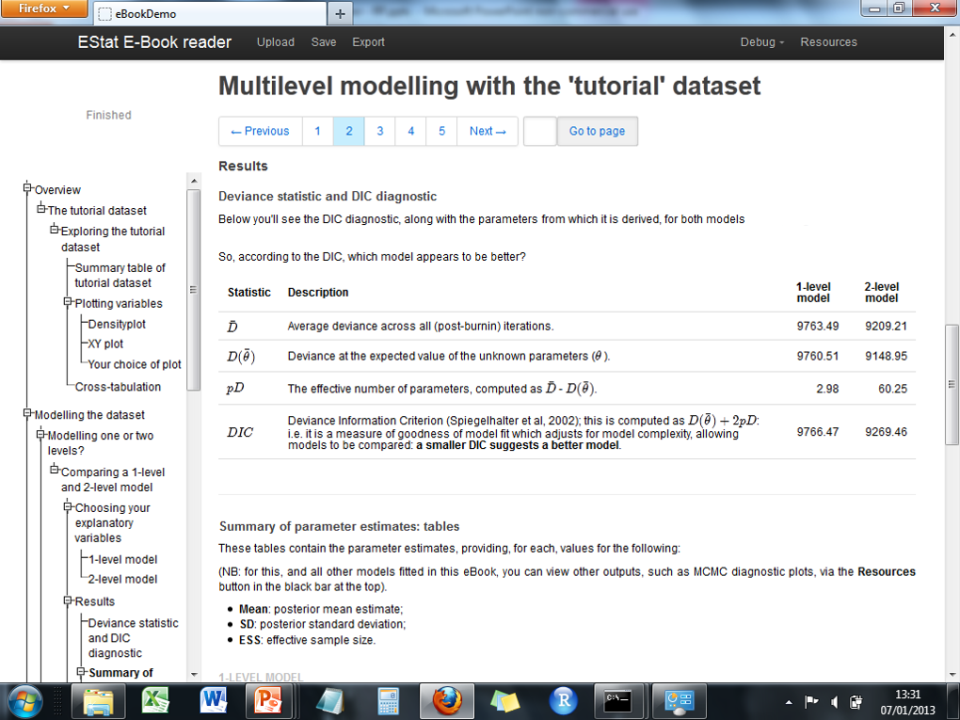 Here the variance partition coefficient is returned based on the user's model choices; these will be calculated anew every time the user changes the model specification: 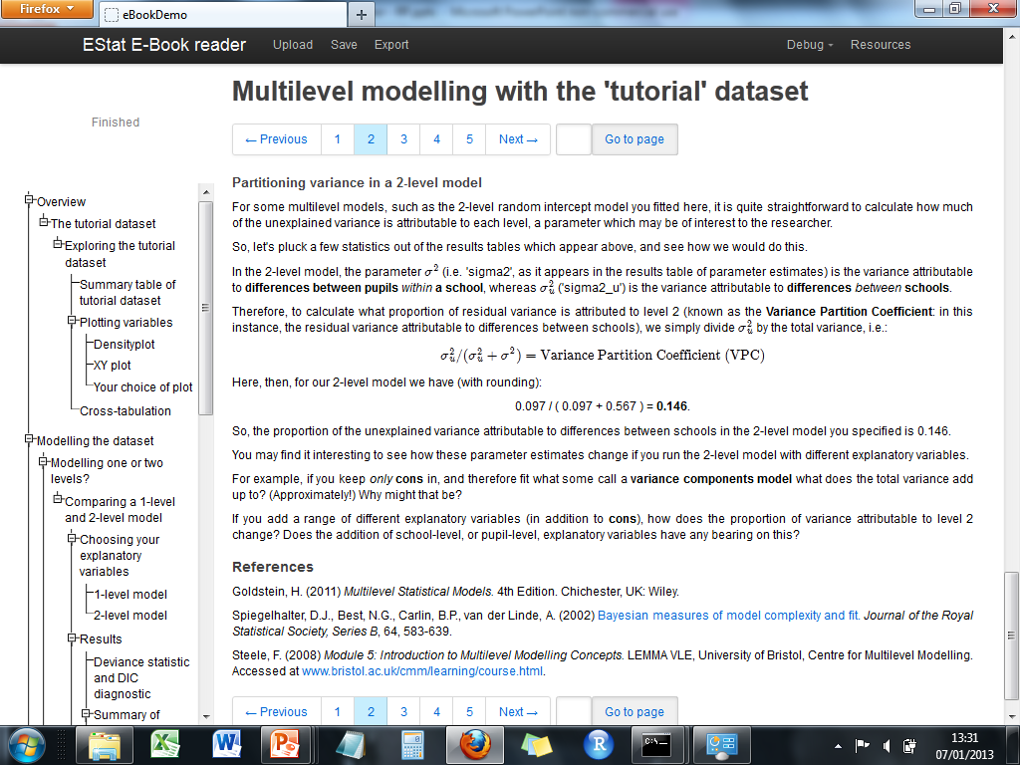 Interoperability with other statistical software

Both TREE and DEEP can interoperate with other statistical software. Here is an example in which a plot reflecting the user's specification has been produced using R, with both the plot, and the R script used to derive it, returned as content in the eBook: 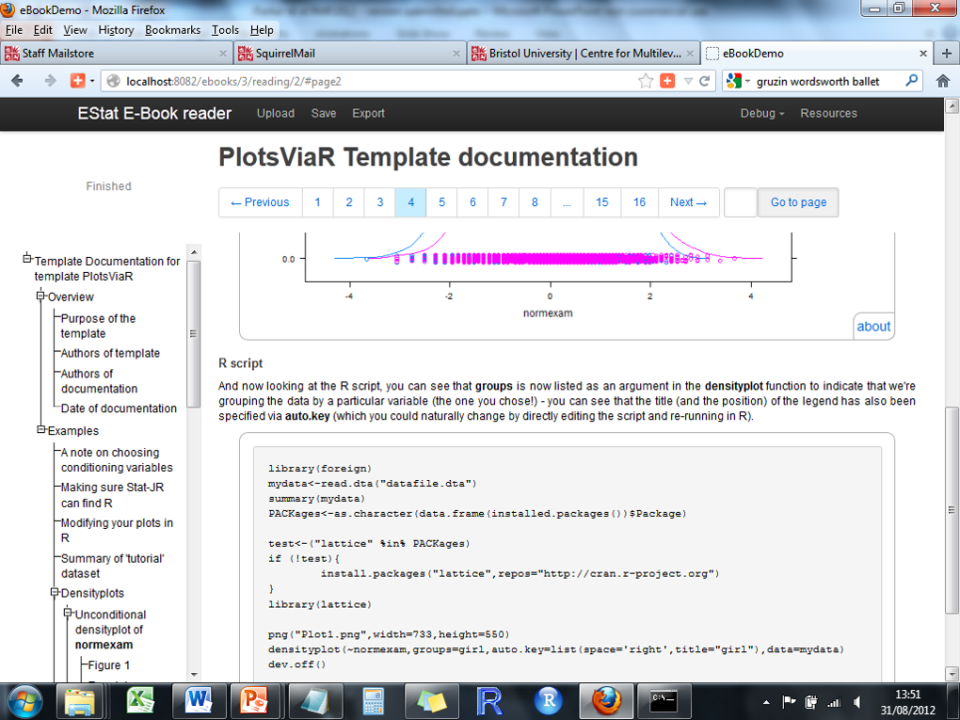 Screenshots of the workflow system

The workflow system consists of a range of blocks accessible from the menus on the left-hand side; each block performs a different function: 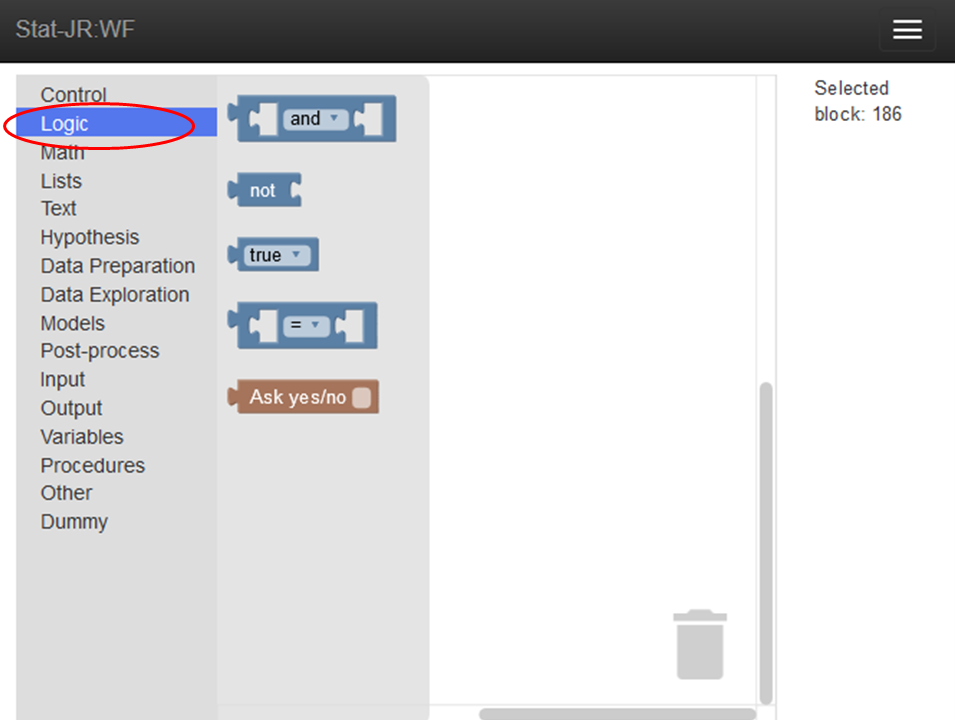 Here we have selected a block which loops through whatever blocks are placed inside it (i.e. to the right of "do") with the number of times it does that defined by whatever we place at the top (i.e. in between "repeat" and "times"): 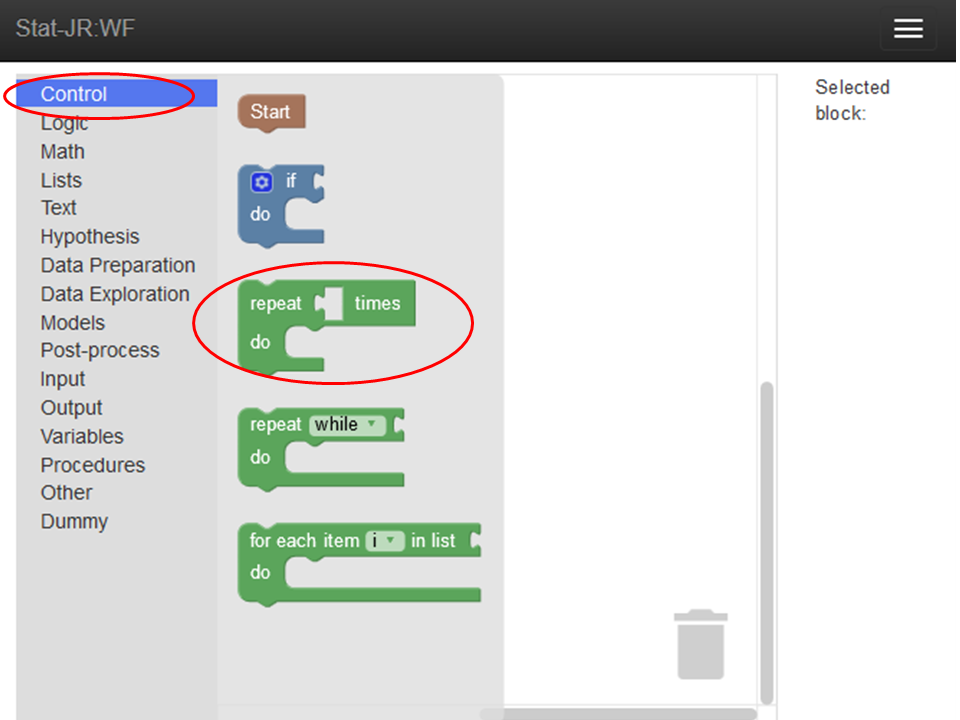 The blocks themselves ensure syntactical rules are respected

As well as the physical shape of blocks determining how users can join them together, you'll find sometimes if you try to fit a block which isn't appropriate - here trying to place a string object (which could consist of inappropriate characters, such as letters) - then it won't allow you to: the block 'pops' out each time you try to fit it in. In this way the blocks themselves guide users to respect correct syntax when fitting them together, helping avoid errors at run-time (note in this picture we've enlarged the size of the blocks): 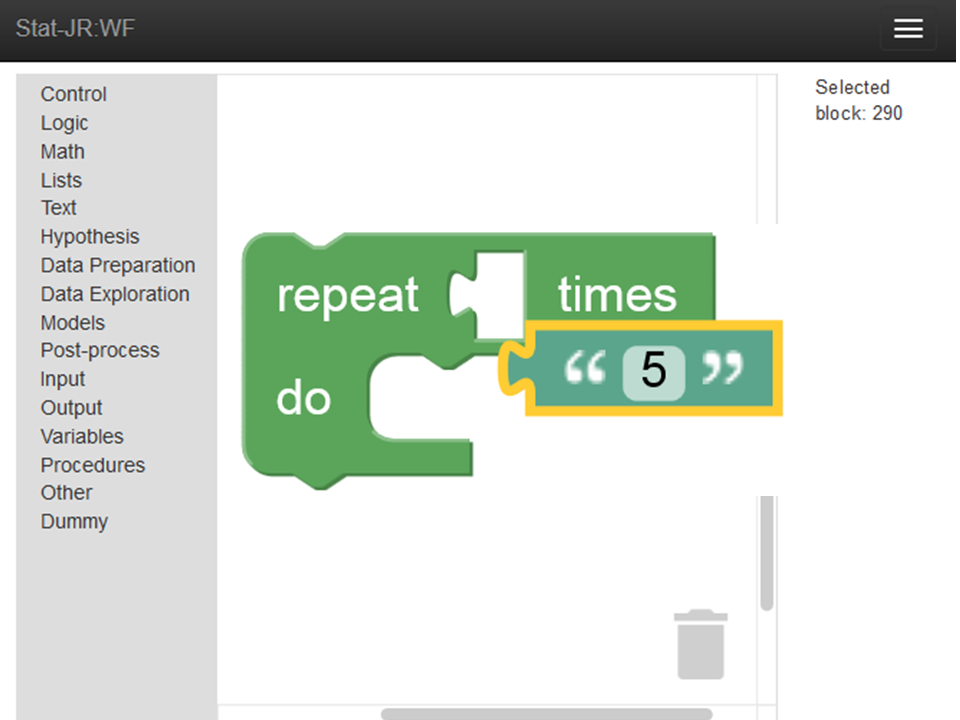 In contrast when we try to use a numeric object block to define the number of iterations the loop will make, the block accepts it: 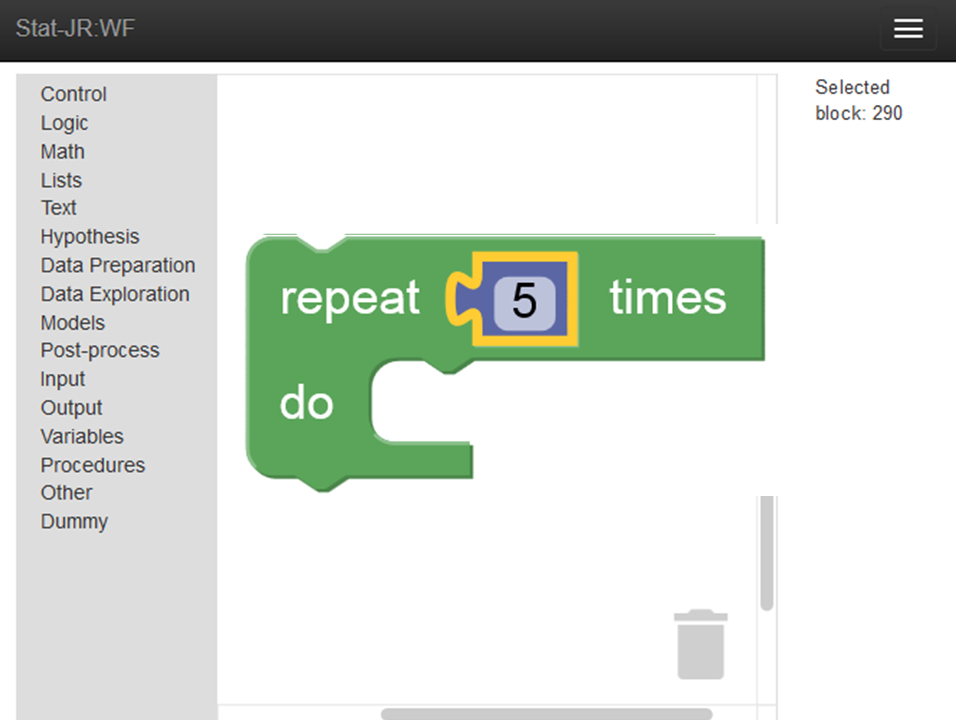 Attaching blocks together to make a workflow

By attaching blocks together, complex workflows can be gradually built up. In this example there are conditional statements, loops, procedure calls, and even questions which prompt the user for input when the workflow runs: 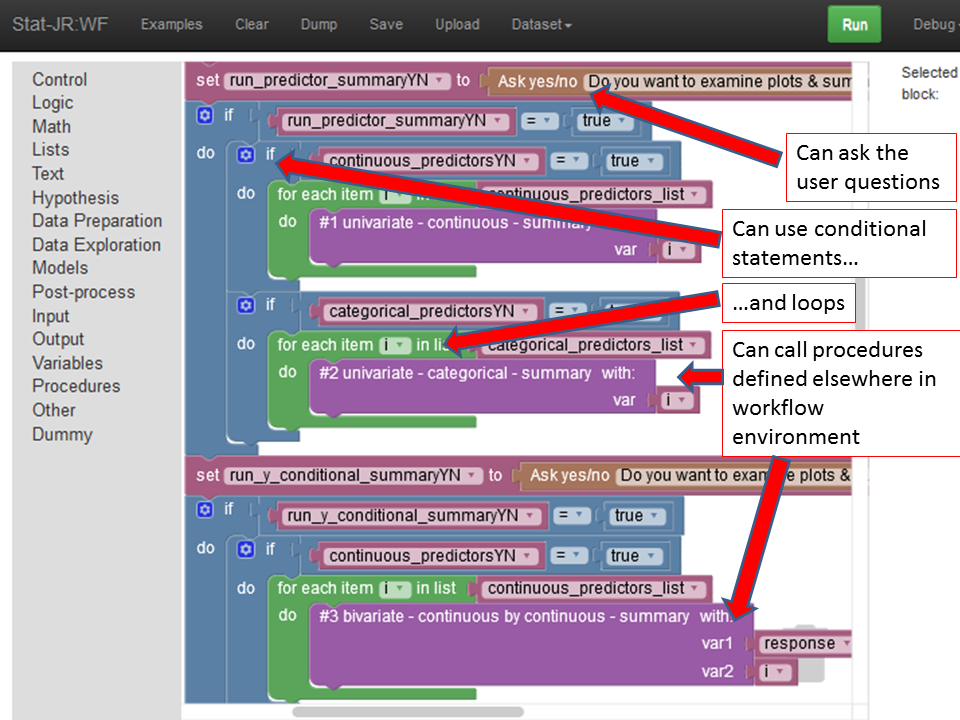