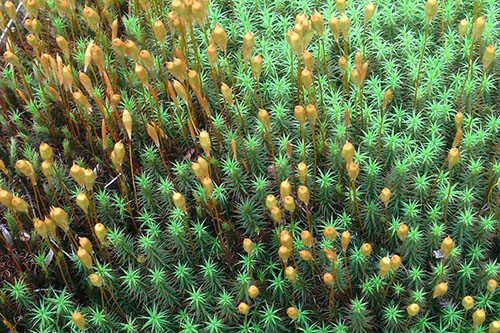 The genes that first enabled plants to grow shoots and conquer the land have been identified by University of Bristol researchers. The findings, published in Current Biology [1 August], explain how a 450-million years ago a switch enabled plants to delay reproduction and grow shoots, leaves and buds.

Over the course of half a billion years of evolution, plants have evolved from tiny and simple ground-hugging forms into diverse and complex varieties that abound the Earth today, from the garden rose to the 100-metre tall redwood tree. An international research team from the Universities of Bristol (UK), Lyon (France) and Palacký (Czech Republic) has now discovered the secrets of shoot evolution.

The team discovered that around 450-million years ago a switch enabled plants to delay reproduction and displace new cells downwards from the shoot tips, paving the way to plant diversification.  Using cutting-edge developmental and genetic techniques, the team studied the swollen reproductive structures at the tips of the small stems of mosses. These plants, which represent a starting point for plant evolution, are raised upwards by new cells generated in the middle of the stem. Despite their different patterns of growth, similar genes are responsible for elongating the stems of mosses and plants with more elaborate shoots.

Contrary to prior work, the results demonstrate a nascent mechanism for shoot development as plants first emerged on land and suggest that a change in the timing and location of gene activity triggered the radiation of shooting forms.

Dr Jill Harrison, the study’s lead author and Senior Lecturer from Bristol’s School of Biological Sciences, explains: “By comparing our new findings from a moss with previous findings, we can see that a pre-existing genetic network was remodelled to allow shoot systems to arise in plant evolution.”

This discovery furthers our basic understanding of how genes regulate plant shape, which could inform efforts to engineer shape and improve the yield of future crops.

For more information on the University of Bristol’s BSc and MSci courses in plant sciences, please visit: http://www.bristol.ac.uk/study/undergraduate/2019/biological-sciences/bsc-plant-sciences/